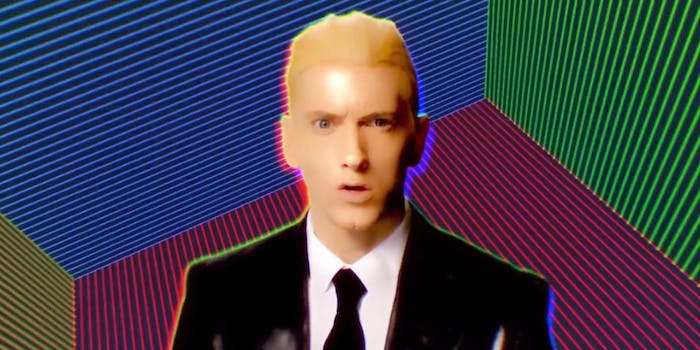 Will Eminem ever grow up?

The battle between Iggy Azalea and Eminem says a lot about music's culture wars.

While the music industry at large prepares to go to war over technology, hip-hop continues to fight its own battle over culture.

Last week, shots were exchanged between Iggy Azalea and Eminem, after a leaked snippet from a track on Eminem’s upcoming Shady XV album surfaced online. In it, he raps, “You’re lucky just to follow my ride/ If I let you run alongside the Humvee/Unless you’re Nicki, grab you by the wrist, let’s ski/So what’s it gon’ be/Put that shit away, Iggy/You don’t wanna blow that rape whistle on me.”

Azalea responded in a series of tweets. “im bored of the old men threatening young women as entertainment trend and much more interested in the young women getting $ trend,” Azalea wrote. “zzzz… its especially akward because my 14 year old brother is the biggest eminem fan and now the artist he admired says he wants to rape me. nice!… women in music have the bigger balls anyhow we endure much more harassment.”

This all comes on the heels of a cypher Eminem released earlier this month where he said he would “punch Lana Del Rey right in the face twice, like Ray Rice.” These lyrics didn’t fly under the radar either, with another, similarly named female rapper, Azealia Banks, who tweeted, “does eminem know that I will personally punch him in his mouth?!… tell him to go back to his trailer park and eat his microwave hotpocket dinner and suck on his sisters tiddies.” Banks was also joined by several other musicians who called out Eminem in this instance.

The above lyrics from Eminem are at once completely shocking and totally unsurprising. Things have definitely changed since Eminem first emerged as a hip-hop superstar in the late ‘90s. Yet for how far we’ve come, the greater music industry continues to have many of the same problems it’s always had.

At first, this new material from Eminem appears so surprising because of where he’s at not only in his career, but in his life. This is a 42-year-old man, with a daughter who just graduated high school. The “he’s just a kid who doesn’t know any better” argument that people used to defend the angry 27-year-old who released The Slim Shady LP in 1999 doesn’t really fly anymore. Of course, 27 isn’t really a kid either, which makes the point invalid anyway; after all, blatant misogyny and homophobia should be unacceptable at any age.

That said, one might also think Eminem was ready to tone this kind of content down based on various decisions he’s made throughout the progression of his career. It made sense that the original Eminem, coming out of the streets of Detroit, would appear as a hardened, deeply troubled young man. But by now, you’d think he would’ve moved on.

First, there was his performance with Elton John, one designed to quell concerns about the rapper’s lyrical homophobia. Years later, in an interview with Anderson Cooper, Em appeared to have distanced himself even further from his homophobic past. Cooper reminded Eminem of his troubled history when it comes to LGBT people: “Some of the lyrics, like, you know, in the song ‘Criminal’ you say, ‘My words are like a dagger with a jagged edge/That’ll stab you in the head, whether you’re a fag or lez/Or the homosex, hermaph or a trans-a-vest/Pants or dress—hate fags? The answer’s ‘yes.'”

In response, Eminem gingerly said, “Yeah, this scene I came up in. That word was thrown around so much, you know, faggot was like thrown around constantly to each other, like in battling.” Cooper pressed on, “Do you not like gay people?” To which Eminem answered, “No, I don’t have any problem with nobody. You know what I mean? I’m just like whatever.”

This is not exactly a beautiful sentiment, but it at least made Eminem look slightly less grotesque on the matter. He’s also made an added push to win back female fans in recent years, collaborating on two massively successful songs as well as a stadium tour with Rihanna. Last year, The Huffington Post’s Marcia Dawkins even claimed it was possible to be an Eminem fan and a feminist.

Nevertheless, the truth is that Eminem has never really moved that far away from his more hate-filled material. It’s been a long time since he recorded something like “Kim,” an ode to killing his ex-wife. But despite recently turning out slightly more thoughtful songs like “Headlights,” revolving around making peace with his his estranged mother, he has consistently been tasteless and offensive on tired subjects. Last year, Eminem faced widespread accusations of homophobia in “Rap God,” in which the rapper uses “gay-looking” as an insult. Things have changed, but less than you’d think.

Perhaps the difference is that now, we’re simply getting upset because he’s naming names. As the Guardian’s Britt Julious observes, this actually follows an old pattern of Em’s. “For someone who traffics in cultural relevancy and cachet, [Lana] Del Rey is a smart target for Eminem,” she writes. “Over-the-top, outrageous and with an eerie beauty, she challenges our understanding of celebrity and American culture. But make no mistake. If this was two years ago and Lady Gaga was still on top of the world, Eminem would have merely slipped in her name instead of Del Rey’s.”

Julious also mentions that Anderson Cooper, of all people, became a target in Eminem’s new cypher, too, suggesting that he persists with the name-dropping, “because he knows it will give him attention.”

It’s interesting to consider Eminem in relation to the response rapper Tyler, the Creator and his Odd Future cohorts have been met with in the past few years. Having clearly been influenced by Em, Tyler has attracted no shortage of controversy for his offensive lyrics, despite having also received his fair share of critical acclaim.

One has to wonder if the same critics who’ve praised Tyler and Odd Future would jump on board so readily if they weren’t so young. On the other hand, however, Tyler has also been told numerous times that he needs to grow up, which makes Eminem’s recent output all the more distressing. Because if we can’t hold an older white man to certain standards, why are we shaking our fingers at a group of black teenagers? Essentially, it’s hard not to feel like part of the newfound backlash against Eminem have something to do with the realization that, because of his race and gender, he’s always had an unfair advantage in the music industry.

Eminem’s place as a straight white male in the music industry, and particularly as a straight white male in hip-hop, no longer functions the way it did when his career first began. Whereas Eminem once looked bold as the prominent white figure in a culture dominated by black men, now he stands out as much for being the beginning of a trend that increasingly finds the culture dominated by white guys.

What’s more significant though than the rise of the white rapper is the resurgence of the female rapper. Beginning with Nicki Minaj, and continuing with artists like Banks, Azalea, and Angel Haze, women have started to become a force to be reckoned with in hip-hop. And this is why Eminem’s latest antics haven’t been shrugged off. Undoubtedly, Azalea’s image presents various problems of its own (her and Snoop Dogg sort of got into it over this), but the point here is that hip-hop is changing. And with LGBT rappers like Le1f,  Mykki Blanco, Zebra Katz, and Big Freedia coming on to the scene, too, the diversity in the genre is reaching a tipping point which could leave rappers like Eminem out in the cold.

Banks and Azalea’s comments about Eminem are the embodiment of all the female MCs out there telling the washed-up rappers that keep hanging around, “Hey, hip-hop doesn’t just belong to you anymore.”

Of course, that still leaves the bigger problem about women’s overall place in the music industry. Iggy Azalea’s comments are just the tip of the iceberg  when it comes to the daily struggles women face; just ask Madonna, Chvrches’ Lauren Mayberry, Janet Jackson, Grimes, Kesha, Mackenzie Phillips, and Karen Carpenter. This is nothing to say of the pervasive sexual and domestic abuse in music, from R. Kelly and Phil Spector to James Brown, Bobby Brown, Chris Brown, Glen Campbell, and Ike Turner, just to name a few.

What all this adds up to is an industry that doesn’t care about female musicians, inside and out. And even if you manage to escape without being manipulated, abused, or assaulted, you’ll still just be a “woman in music,” rather than a real musician.

On top of this, what artists like Eminem threaten to perpetrate is a system that not only looks past violence towards women, but which actively glamorizes it. It’s oddly fitting that Em’s lyrics about Lana Del Rey have leaked within weeks of a new controversy surrounding the ever-scandalous singer. Last Friday, a video from director Eli Roth surfaced, featuring goth rocker Marilyn Manson (supposedly against his will) and Del Rey. In the extremely disturbing clip, Del Rey is violently raped at the hands of an aggressor played by Roth himself.

Discussing the video over at Pitchfork, Senior Editor Jessica Hopper writes that without any commentary from Del Rey, “All we have is this too-typical, stomach-turning, triggerbait clip that serves as further reminder of how often the nature of sexual assault is misunderstood and sexualized in mainstream media, how often we see and hear representation of women’s suffering through a man’s lens.”

Not all of this is as evident as Eminem rapping about punching women, or Roth’s depiction of rape in his collaboration with Del Rey. Something that’s in theory supposed to be innocuous, like Maroon 5’s creepy video for “Animals,” can be just as harmful, precisely because its so insidious. You might not even notice.

As for Eminem, one has to hope that he still learns the error of his ways. He’s an incredibly talented rapper, but as we all should know at this point, being a great entertainer doesn’t make you a good person. At the Guardian, Julious proposes that we fix his career by simply not paying attention to it anymore. Julious writes, “As long as we give him attention, as long as we act as if what he says is any way different or more shocking than the still-troubling, discriminatory, and offensive world we live in, he will still find ‘success’ in his ‘controversies.'”

Julious has a point, but it remains hard not to pay attention when someone espouses virtues which are so virulently awful. It’s easy, simultaneously, to urge Eminem to ease up on his violent lyrics based on the fact that he has an 18-year-old daughter. But it’s a lot more important to remember that he should do so just because it’s the right thing to do.