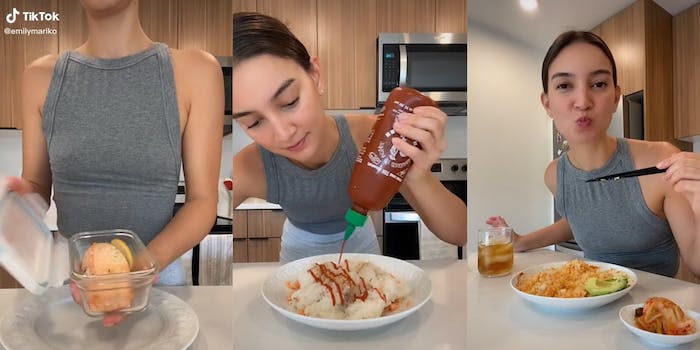 How does a TikTok of a woman heating up leftover salmon get more than 40 million views?

Emily Mariko has quite a hold on TikTok right now. A Sept. 21 video—in which 29-year-old Mariko smashes up leftover salmon and rice, adds an ice cube and microwaves, then adds soy sauce, siracha, and kewpie mayo, as well as kimchi and seaweed—has gone viral less than a month after it was posted to the app.

Mariko’s videos look a lot like other food-prep tutorials on TikTok: quick cuts, no dialogue. They’re very soothing. But there’s obviously something aspirational about her content and aesthetic.

There are dozens of videos of people trying to recreate the salmon dish, often with their own personal tweaks. “Waking up to play Emily Mariko simulator,” wrote justmavy.

“I really thought I was immune to being influenced by aspirational lifestyle content,” said sarahspellings.

“Kewpie mayo is sold out at the asian market…the emily mariko effect,” zoemjack wrote on Twitter.

There’s been some confusion around the inclusion of an ice cube, which in Mariko’s video does not melt after being microwaved. There are now several videos explaining the science of the microwaved ice cube, and how it simply provides steam for the rice. Lizzo, who recently made a vegan version, had something interesting pop up in hers.

Mariko’s videos, which use her always-clean kitchen as a backdrop, focus on healthy foods and easy recipes. After a year and a half in a pandemic, it seems lots of people are receptive to changing their diet and habits. But what else has so many people obsessed? The Cut has some theories, from an ASMR angle to her relative attractiveness. Embedded, Kate Lindsay and Nick Catucci’s internet culture newsletter, posits that she “combines two of TikTok’s favorite things: viral recipes and that-girl lifestyle.”

Mariko has been on YouTube since 2010 and could be more broadly defined as a lifestyle vlogger; a majority of her content is fashion-centric, and she’s a known creator. She has more than 337,000 subscribers on YouTube, but her TikTok follower count has ballooned to more than 3 million. This kind of ascent isn’t atypical on TikTok; over the summer, Victoria Paris was touted as the new “that girl.” She currently has just over 1 million followers, but there’s already been some backlash around her. Mariko is seeing criticism too: When you search her name on TikTok, one of the first suggestions is “emily mariko annoying.”

“I love her content,” Kristie-Valerie Hoang wrote on Twitter. “But seeing how viral that video went makes me think about how Asian food has to be presented in order to be palatable by the masses.”

We reached out to Mariko for comment. She noted in her new Substack that she’s seen all the duets and reaction videos.