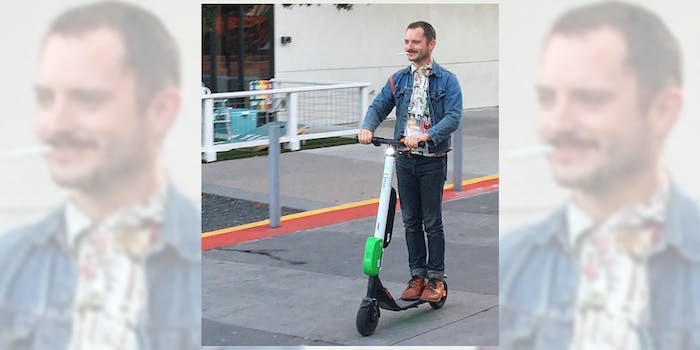 Elijah Wood on a scooter is just what the internet needed

This is Elijah Wood.

Nothing to see here. Just Elijah Wood riding by on a rental scooter. pic.twitter.com/UFCI8U1jOa

He’s having a fantastic day, thank you very much.

Author C. Robert Cargill snapped this quick photo recently of the actor riding by on a Lime-branded rental scooter, presumably somewhere in Austin, Texas for 2018’s Fantastic Fest, the largest genre film festival in the U.S.

Predictably, he’s looking so jovial that fans can’t get enough of Wood and his scooter, with one tweet’s caption calling back to Wood’s role as Frodo Baggins in the Lord of the Rings films.

When you destroyed the One Ring and brought lasting peace to the realm pic.twitter.com/eWH4jnC1Kl

As you can imagine, people had a field day with Wood in such a seemingly jovial mood.

a god among men

Maybe we’d all be in a great mood if we were partially responsible for the chilling psychological horror game Transference, or for getting Nicolas Cage, one of the greats, to take the lead role in Panos Cosmatos’s excellent flick Mandy.

Where is he going on that scooter? Why’s he in such a great mood? It doesn’t matter. In the hellscape known as today’s world in 2018, it’s good to just see someone living their best life. Elijah is doing just that, it looks like. Perhaps he’s sightseeing.

Whatever the case may be, we hope to see more of Elijah hopping scooters and zipping around town.