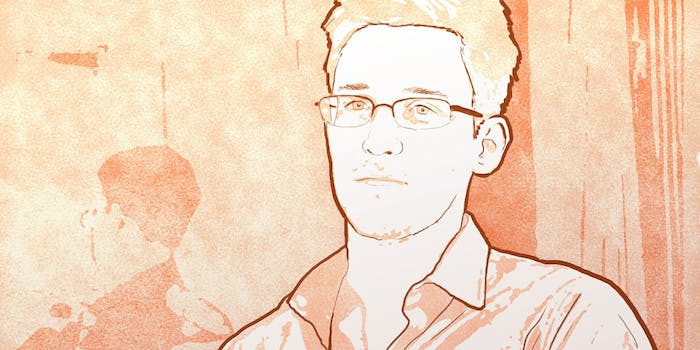 Edward Snowden is a criminal—and a hero

What the Democratic contenders don't understand about Snowden's civil disobedience.

In what turned out to be a rather amiable debate, Democratic candidates Sen. Bernie Sanders (I-Vt.) and former Secretary of State Hillary Clinton found common ground on most of the issues. During CNN’s first televised presidential debate, the two notably agreed about what to do with Edward Snowden, the former NSA contractor who revealed the agency’s mass surveillance programs to the public.

“He broke the laws of the United States,” Clinton said. “He could have been a whistleblower, he could have gotten all the protections of a whistleblower. He chose not to do that.” Sanders agreed Snowden should face legal penalties, though praised him for playing “a very important role in educating the American public.”

That might seem paradoxical. How can you thank Snowden for being a hero for exposing an illegal and Orwellian program, but also want him charged for doing so? Under the Federal Whistleblower Protection Act, any government worker has official channels through which they can reveal any action by a fellow official, which is evidence for “a violation of a law, rule or regulation; gross mismanagement; gross waste of funds; an abuse of authority; or a substantial and specific danger to public health or safety.”

By any measure, Snowden revealed just this kind of information. Although the NSA’s programs were perceived as legal, if unconstitutional, at the time Snowden began leaking documents in 2013, a federal judge has since found otherwise.

While the Obama administration defended the programs under the Patriot Act’s Section 215 (which has since expired), Judge Gerard E. Lynch of the Second Circuit Court of Appeals ruled in May the law “cannot bear the weight the government asks us to assign to it, and that it does not authorize the telephone metadata program.”

In fact, Snowden claimed in 2014 that he brought details of the illegal programs to “10 distinct officials,” yet received little more than a yawn from each.

The Atlantic’s Conor Friedersdorf called the ruling a “vindication” of Snowden’s actions and stated, “Any punishment for revealing the phone dragnet would be unjust.” Were it so simple. Snowden stole massive troves of data from a federal intelligence agency and passed them on to a member of the press, ensuring the publication of top secret information. Under current whistleblower protections for federal workers or contractors, this is illegal—whether it revealed wrongdoing or not.

The Espionage Act, the law under which Edward Snowden has been charged, has no specific language or process for whistleblowers. The only law that could protect Snowden is the more recent 1998 Intelligence Community section of the Whistleblower Protection Act, which allowed for Snowden to report the programs he viewed as illegal to his superior, the NSA Inspector General. Given that the office of the Inspector General authored an internal report on the mass surveillance of phone records in 2009, it’s unlikely they would have cared. In fact, Snowden claimed in 2014 he brought these details to “10 distinct officials,” yet received little more than a yawn from each.

According to the law, Snowden’s next stop should have been any member of a Congressional intelligence committee with clearance enough to view the information, to whom it also wouldn’t have been much news. However, had Snowden gone through each and proper channel, he still might have faced prosecution. Thomas Drake, an NSA whistleblower who was charged in 2011, managed to dodge penalties under the Espionage Act, yet still plead guilty to misdemeanor charges, for which he faced no jail time.

Snowden himself says, as a contractor (rather than a direct employee of the NSA like Drake), he actually had no protections as a whistleblower under current law. “I would not have been protected from retaliation and legal sanction for revealing classified information about lawbreaking in accordance with the recommended process,” Snowden said in 2014. In 2012, Barack Obama signed an executive order granting protections from retaliation (like lawsuits or dismissal) to federal employees but not to federal contractors, such as former Snowden employer Booz Allen Hamilton.

Edward Snowden knowingly broke the law as an act of civil disobedience.

While it’s unlikely Snowden would have found a sympathetic voice through any of the official channels, (and if he’d done so, he likely would still have faced charges) it doesn’t change his direct violation of the Espionage Act in transferring the information to a member of the press. And Snowden clearly knew this: The documentary Citizenfour highlights Snowden’s initial stress upon releasing the information while hiding out in a Hong Kong hotel room. Just last week, Snowden expressed a willingness to face trial and go to jail if it meant he could return to the United States from his seclusion in Russia.

The labyrinthian trap Snowden would have been forced to navigate had he gone through official channels to reveal the NSA’s program should highlight a couple of things. First, the absolute heroism and patriotism of Snowden himself, who broke federal laws for the benefit of the public good and at great sacrifice to his own life and well-being, should only be proven by the complexity of the law. Second, what lesson should we learn about a system of protections for whistleblowers that someone who found legitimate and widespread wrongdoing found it easier to go into exile than do it legally?

This is the debate Clinton and Sanders should be having. There is no doubt in any legal mind that Snowden, barring an official pardon or plea deal with the government, will face the charges levied against him if he ever returns to the United States.

He knowingly broke the law as an act of civil disobedience. Considering the overall value he has provided to American society and our political discourse, however, he shouldn’t even have to face trial.