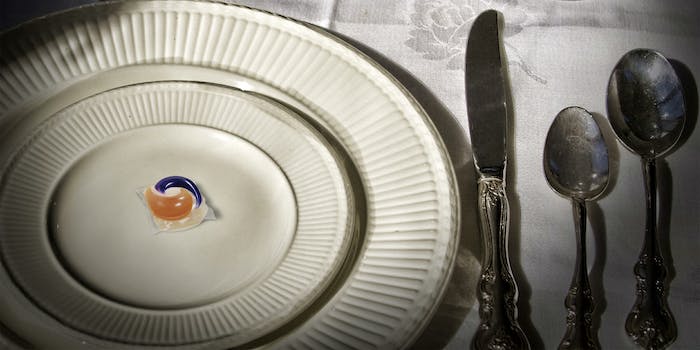 The meme starts a discussion on recipes for edible Tide Pods.

Over the last month, eating Tide Pods quickly became a popular meme. Of course, people aren’t actually eating Tide Pods on purpose (we hope), because ingesting a small pouch of concentrated laundry detergent could result in death. The issue is that Tide Pods look edible to some people. Like Gushers, or candy. Now people who believe that the multi-colored swirl pouches would make a good snack if they weren’t filled with harmful chemicals have found a solution: make an edible Tide Pod.

A recipe was shared this week on Twitter, which originally appeared on Tumblr, that showed how one could make a dessert that looks like a Tide Pod. The “Hypothetical edible tide pods recipe” consists of four components: A blue swirl, an orange swirl, white gel, and a plastic shell. ” The main ingredient is gelatin.

“Eat in front of friends aware of the tide pod memes for maximum fun!” the recipe suggests.

BREAKING: Someone on Tumblr has come up with an edible tide pod recipe pic.twitter.com/opiIZzgDk4

We haven’t heard of anyone actually trying out this recipe and enjoying it (yet!), but before this recipe hit the internet there was definitely a demand for it. On Twitter, people said they would eat edible Tide Pods, if available.

Can someone just make an edible tide pod already Jesus

in other words, no i would not actually eat a tide pod, but if they were edible and not made out of detergent, i would consider it

What about just asking Gushers to make an edible laundry pod version of their snack food? Yeah, people tried that and it didn’t go over well with the company.

i really tried and died for the cause pic.twitter.com/WxtF27BMjP

On Reddit last week, a person started a discussion on a recipes subreddit about materials to use in an edible Tide Pod recipe. “Does anybody have a good, gooey, grape or orange filling recipe that has a very even and vivid look?” a user named wiisportsresort said. “I’m not being sarcastic, I actually want to make this.”

Would any of these hypothetical recipes result in a tasty dessert? We’ll let you know if we try them out.