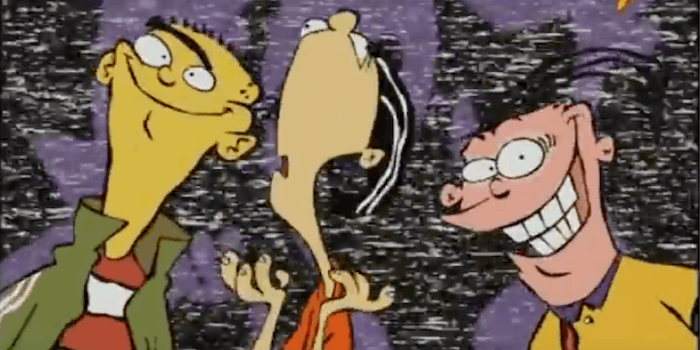 Easily one of the funniest memes of the year.

The goofy Cartoon Network show Ed, Edd n Eddy, which follows the schemes and hijinx of three suburban boys, went off the air in 2009. Nearly 10 years later, it’s fondly remembered by kids who grew up in the oughts, which makes it prime fodder for memes. But unlike its contemporaries, SpongeBob SquarePants and Jimmy Neutron, memers mostly love Ed, Edd n Eddy for its goofy sound effects. On YouTube, they’re re-scoring dramatic fight scenes using the show’s silly boings, squeaks, and jazz horns.

For example, here’s the highway battle scene from Deadpool with its audio Edd-ified. This skillfully edited video seems to have started the whole craze:

There's already a few good ones on You Tube! I'm SO glad that this is a meme now!#ededdneddy
Deadpool Highway Scene but with Ed, Edd, n Eddy Sound Effects https://t.co/nRCC9mJBEg

Check out this cartoon crossover with Dragonball Z:

You don’t have to be familiar with Indonesian action flick The Raid: Redemption to appreciate the great editing here:

There are dozens of these out there on YouTube now, and they’re getting rave reviews from meme fans. Ed, Edd n Eddy might be an early pick for Meme of the Year:

The Ed, Edd, & Eddy Sound Effect meme trumps every Spongebob meme that has or ever will exist

Yo this Ed Edd Eddy voice over meme is so fucking good dude.

What makes the meme worth raving about? Part of it is the effort required to make a good one. It takes rudimentary video editing skills, plus a good sense of comedic timing and scene selection. (It also takes this sound effects file, shared by the editor of the Deadpool video.) A thorough knowledge of Ed, Edd n Eddy and its various audio cues and background music helps, too. This is a far cry from just adding a caption to an image, as in most popular memes.

The other part is the comedy value of putting boings and bloops over violent scenes that were meant to be taken seriously. Combining two popular media franchises has always been a shortcut to meme success, but doing it in a way that’s inherently funny, and doing it with some skill and flair, is what makes this meme so good.

The effort of producing these videos, and the huge library of fight scenes that would work with the meme, ensure that it won’t get old and overplayed as quickly as the year’s other big memes, like Ugandan Knuckles and Evil Patrick. Long live Ed, Edd n Eddy, and congrats to the show’s sound designers for finally getting the widespread appreciation they deserve.