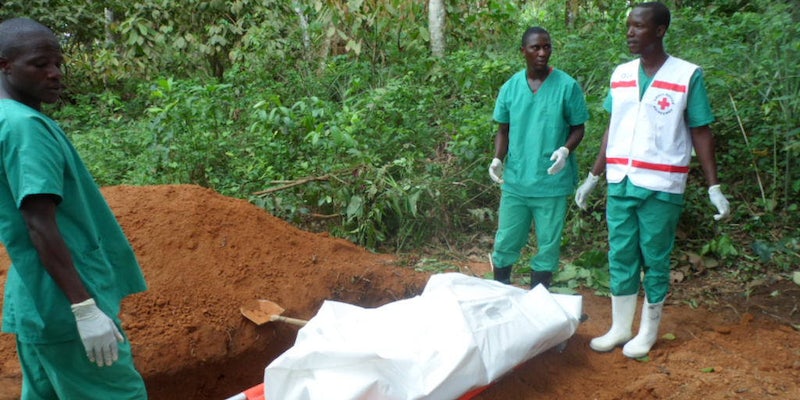 How to survive an Ebola plague

The Internet is terrified of Ebola, and for anyone who was alive in the '80s, the panic might seem a bit familar.

In case you haven’t heard, the Ebola virus has officially sent the United States into a media, and therefore, public frenzy over the risk of widespread transmission from the first domestic diagnosis and subsequent transmissions.

Worrying about when I should start being worried about Ebola.

“3 People Out of 310 Million” infected with Ebola. If only the same attention had been paid to the AIDS epidemic…

Several leading media sources have referred to the recent spread of Ebola as “the new AIDS,” as the infection continues to spread and public health officials are left with little-to-no tools to treat the virus once it has been caught.

Even the director of the Centers for Disease Control, Thomas Frieden, has compared Ebola to AIDS. “This is a fluid and heterogeneous epidemic. It’s changing quickly, and it’s going to be a long fight,” Frieden said during a World Bank forum last week, according to reports. “I will say that in the 30 years I’ve been working in public health, the only thing like this has been AIDS. We have to work now so this is not the world’s next AIDS.”

Even though Ebola and AIDS are starkly different in more ways than they are the same, there is one deeply troubling parallel between the two diseases, and it is how the American culture addresses such issues.

A disease knows no borders, no nationalities, and no sexuality. Ebola (or HIV) was easy to ignore as long as it stayed in West Africa (or the gay community), but after two missionaries (or a heterosexual child and a movie star) became positive, swift governmental measures had to be taken.

When HIV began to spread in 1981, no one had a clue as to how the virus spread and why it seemed to only infect gay men. It was initially referred to as gay cancer, then Gay-Related Immune Deficiency (GRID), before the disease became known as AIDS.

By 1983, researchers in Maryland identified HIV as the virus that causes AIDS. But the federal, state, and city governments simply couldn’t be bothered to release any information to the general public, much less commit funding for research to the growing epidemic.

But why did the majority not care, you ask? The answer is simple, because as long as the disease only affected gay men, it wasn’t a real American problem.

In 1985, Rock Hudson passed away from AIDS, and a fresh-faced, Midwest teenager named Ryan White contracted the virus through a contaminated blood transfusion. It had been four years since the virus began to spread, but now the gay plague could no longer be ignored, for it had ravaged one of the most beloved leading men in the history of the big screen and now could be transmitted to heterosexuals as well.

So President Reagan finally uttered “AIDS” and “HIV” for the first time, four years after the epidemic began. By this time, nearly 4,000 people, almost all of them gay men, had died. The U.S. Congress allocated $70 million to AIDS research, because as much as it may have been on the news, it finally hit Doris Day’s on-screen lover and the boy next door.

Although the first Ebola outbreak occurred in 1976, it remained that ominous exotic and foreign disease that some people remembered from that book released in the 90s, The Hot Zone. When the CDC issued its initial announcement of an outbreak in Guinea, and 89 reported cases in Liberia and Sierra Leone, the information was consumed and discarded by the American masses just like any other foreign issue with no direct link to middle America. As the outbreak continued to grow throughout the summer, major U.S. media sources continued to increase its coverage of the epidemic. But this was received, by in large, as much more of the same.

Surprising, you say? Well, just like with HIV, out of sight, out of mind.

The streaming news of Ebola remained background noise until news broke of two American aid workers in Liberia who tested positive for the virus. American doctor Kent Brantly from Texas and Mission worker Nancy Writebol from North Carolina were the first Americans touched by this exotic plague. As they were transported to the U.S. to receive treatment, Writebol was described by multiple news sources as a loving mother, a devoted wife and a humble woman of faith. Dr. Brantly was a young, attractive doctor with a wife and two children. Now, Ebola wasn’t just the ominous African disease seen on the news, because it had suddenly affected a white church lady and a young American doctor, and it was coming stateside.

American culture and media has created a public that can’t fathom how a problem affecting such a destitute part of the world could worm its way into the exceptional land that is the U.S. This, however, is the kind of mindset that diseases like Ebola and HIV thrive on.

Brantly and Writebol were U.S. citizens, and so as much as their case was considered a tragedy, it was also viewed as caught from the “outside.” They had contracted the virus while in West Africa, so the evil still was born and remained overseas. Ebola hadn’t actually come to the U.S., not until Thomas Eric Duncan walked into a hospital in Dallas. After more than 4,000 people had died from Ebola, this one case of the virus had even the most news illiterate people paying attention and demanding something be done.

Now, around-the-clock news coverage is swarming around the case of the young nurse, Nina Pham, and the protocols in place in the U.S. Even reports about Pham’s dog have taken precedent on CNN and MSNBC, overshadowing the countless stories of struggle, loss, and the fight to quell the raging epidemic in West Africa. The picture of Pham and her puppy are much more captivating.

And here is where Ebola is precisely like AIDS. Today, virtually all of the coverage on Ebola is about the situation in America, not the massive problem abroad. To date, roughly almost 5,000 people have died from Ebola, but the victims were from the wrong country and were the wrong skin color for people to think it had anything to do with them. Exchange wrong skin color for the wrong sexuality, and it’s the same problem in a different package.

Nobody deserves to contract a deadly virus such as Ebola or HIV, regardless of nationality, sexuality, or because of the color of our skin. Hopefully, our nation can unite with Uganda, Liberia and the other countries that have experience treating the Ebola virus. Our resources combined with the experience of these nations could quash the spread of the virus.

Ebola and HIV are different diseases. But both show how badly we need action that values the lives of all people. We should pay attention to anyone who experiences loss of someone they love, regardless of race, color, nationality or sexuality.

This article was originally featured on the Advocate and reposted with permission.