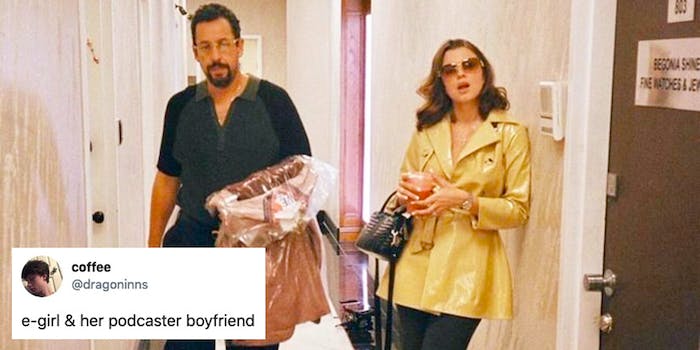 You absolutely hate to see it.

It never ceases to amaze how, in film and television, even the most mediocre, generally unappealing, and overwhelmingly white men, in particular, always seem to level up out of their league. Chalk it up to the curse of the Manic Pixie Dream Girl—in the pages of scripts, beautiful and quirky women serve little other purposes than to provide a romantic interest for middling male protagonists. In real life, this phenomenon has now manifested as the “e-girl and her podcaster boyfriend” meme going around on Twitter.

As film critic Nathan Rabin, who coined the term Manic Pixie Dream Girl, famously once said, these female characters exist “solely in the fevered imaginations of sensitive writer-directors to teach broodingly soulful young men to embrace life and its infinite mysteries and adventures.” How else would you explain many of the mismatched couples that have graced screens for decades?

The “e-girl and her podcaster boyfriend” meme, however, pairs examples of these cinematic couples with the “e-girl” stereotype—as in, attractive young women with twee aesthetics such as vivid makeup, blunt bangs, and alternative style—dating down to nerdy “podcaster” type boyfriends.

The meme gained popularity over the weekend after the following example went viral, which riffs off of Adam Sander’s character in Uncut Gems alongside his much younger, attractive employee girlfriend.

Other examples of the “e-girl and her podcaster boyfriend” meme drew from films such as Austin Powers, The Shining, and Who Framed Roger Rabbit—as well as both Charlie Kaufman films Eternal Sunshine of the Spotless Mind and I’m Thinking of Ending Things.

For at least a few people, the meme evoked the film Paris, Texas, which stars Harry Dean Stanton as a man searching for his estranged young wife.

Danny DeVito and Michelle Pfeiffer starring as the Penguin and Catwoman in 1992’s Batman Returns also gave off some serious “e-girl and her podcaster boyfriend” vibes.

Unfortunately, there are far fewer examples of the “e-girl and her podcaster boyfriend meme” with roles reversed and the women “dating up.” And if so, these relationships are played for comedic effect in films such as I Feel Pretty and Isn’t It Romantic. There’s good reason why the meme isn’t an “e-boy and his podcaster girlfriend,” that’s for damn sure.