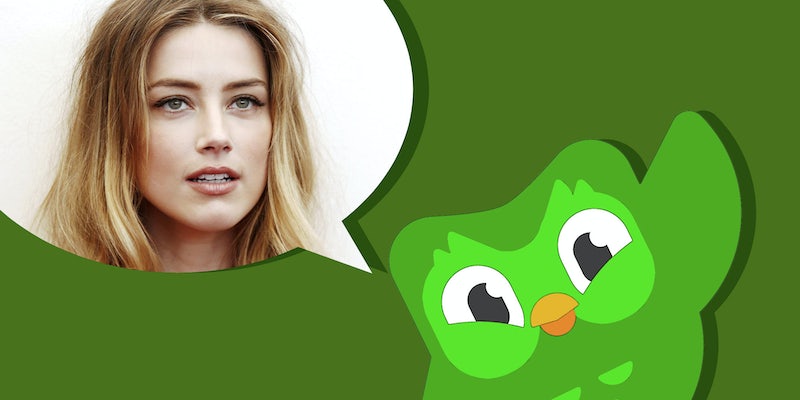 'The Depp fandom bubble on TikTok is very real.'

Duolingo is catching social media backlash for apparently leaving an insensitive comment on a TikTok video about the Amber Heard and Johnny Depp trial.

A Twitter user known as Chris Harihar (@ChrisHarihar) tweeted alleged screenshots of the comment, which Duolingo left on a TikTok posted by NBC News (@nbcnews) about the Heard/Depp trial.

Depp is suing his ex-wife Heard for $50 million, claiming defamation over a 2018 opinion article Heard wrote about alleged abuse that he claims caused him to lose work. Both Heard and Depp, who were married from 2015 to 2016, have accused each other of physical violence during their relationship—and they have both denied the other’s claims.

According to Harihar, a brand account such as Duolingo has “no place” commenting on the trial or anything about it.

“On what planet does a brand – even @duolingo – think it’s cool to crack jokes about an alleged victim of domestic violence? The Depp fandom bubble on TikTok is very real but no brand should get anywhere near it,” Harihar tweeted, tagging Duolingo.

The language-learning brand is well known on TikTok for its lively, humorous videos and cheeky, unexpected comments on other users’ videos. Its TikTok account (@duolingo) has amassed 4.2 million followers.

The alleged screenshot shared by Harihar shows a comment from Duolingo asking, “y’all think amber watches tiktok?” The comment appears to have since been deleted from the video.

“Ha..they know they screwed up. The comment is gone now,” the user tweeted in reply to Harihar.

“I have a terrible feeling some social media manager forgot to switch to [their] personal profile and is about to learn that actions have consequences,” another user speculated.

Another user disagreed and replied to the tweet, “No this is pretty on brand for the Duolingo account. It was probably intentional.”

Regardless of whether the “joke” was intentional or not, other users said it was “unacceptable.”

“That’s fucked up,” one user tweeted.

By the time of publication, Duolingo had not publicly addressed the callout. The Daily Dot reached out to the brand via press email.