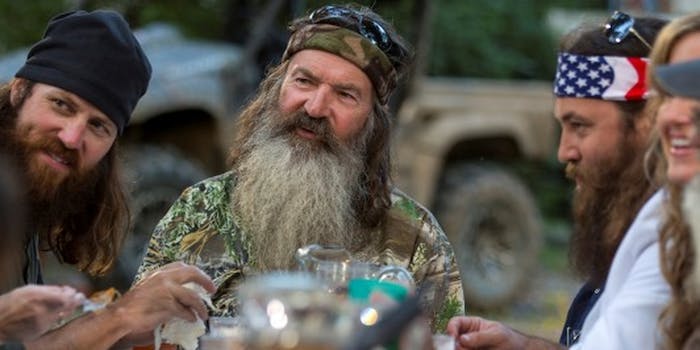 How ‘Duck Dynasty’ got caught in Twitter’s spam filter

Twitter blames the block on IStandWithPhil.com on a third-party spam tracker.

For legions of Duck Dynasty fans standing behind embattled Duck Commander patriarch Phil Robertson after his controversial remarks on blacks and gays, it just may be a Christmas miracle.

After blocking users from spreading the IStandWithPhil.com URL, Twitter has restored Robertson supporters’ ability to spread the petition in support of the recently suspended reality TV personality.

Twitter says IStandWithPhil.com had been mistakenly flagged as spam. On Monday, users attempting to tweet the URL were greeted with the message, “Oops! A URL in your Tweet appears to link to a page that has spammy or unsafe content.”

According to The Wrap, Twitter has since lifted the block, blaming it on a third-party spam tracker.

“The URL IStandWithPhil.com was mistakenly flagged as spam tonight, by an outside organization that tracks spam sources. We have restored access and apologize for the error,” Twitter said in a statement.

On Monday, Faith Driven Consumer, the group behind IStandWithPhil.com, released a statement condemning Twitter for its actions, suggesting that the move was intentional. After the block was removed, the group put out another statement crediting its supporters for overturning the decision.

“While Twitter has not yet communicated with us or acknowledged you, the IStandWithPhil.com community, they were compelled to respond because of the groundswell of support,” reads the site’s blog. “This was all because you made YOUR voice as a Faith Driven Consumer heard. We’re so grateful for your help.”

As of Wednesday morning, IStandWithPhil.com’s petition has more than 221,000 signatures.

Despite the apology, Robertson supporters continued to express their doubt.

Twitter calling the blocking of the #IStandWithPhil site an accident? I can’t stand such blatant lying!

MISTAKENLY .. yeah, right .. it was obamabot butt licking CENSORSHIP & u should b ASHAMED of urselves —–> http://t.co/H3mYZNj4Sl

Twitter has not gone into the specifics about how IStandWithPhil.com came to be blocked in the first place. On Twitter’s technical support page, the social network explains some of the guidelines it uses for determining whether an account is or is not spam, looking at criteria like how rapidly users are followed and how many links are shared versus personal updates. It’s unclear though what criteria may have led to IStandWithPhil.com being blocked.

The blocking of the pro-Robertson site may have also been the result of Twitter’s ongoing fight against spam in general. The social network has invested millions to stay one-step ahead of spammers who create waves of new spambots of ever increasing sophistication. Spambot technology has increased so much that researchers in South America were able to create a fake account that wound up having more social media influence than a number of prominent world leaders. So it’s entirely possible that in their fight to stamp out spam, the network could be getting a little overzealous.

Robertson has been the lastest culture war flashpoint, ever since GQ published incendiary comments made by the Christian, conservative reality TV personality. In an interview with the magazine, Robertson cited his faith while condemning homosexuality.

“I never, with my eyes, saw the mistreatment of any black person. Not once. Where we lived was all farmers. The blacks worked for the farmers. I hoed cotton with them. I’m with the blacks, because we’re white trash. We’re going across the field. … They’re singing and happy. I never heard one of them, one black person, say, ‘I tell you what: These doggone white people’—not a word! … Pre-entitlement, pre-welfare, you say: Were they happy? They were godly; they were happy; no one was singing the blues.”

As Ta-Nehisi Coates pointed out in the Atlantic, there might be a reason why that’s all Robertson saw.

Robertson’s comments led to his indefinite suspension from the show. A&E executives have been mum on whether or not Robertson will return. Duck Dynasty has been a cash cow and a ratings bonanza for the network. It’s the highest rated show in the history of cable television and made over $400 million from merchandise sales this year.