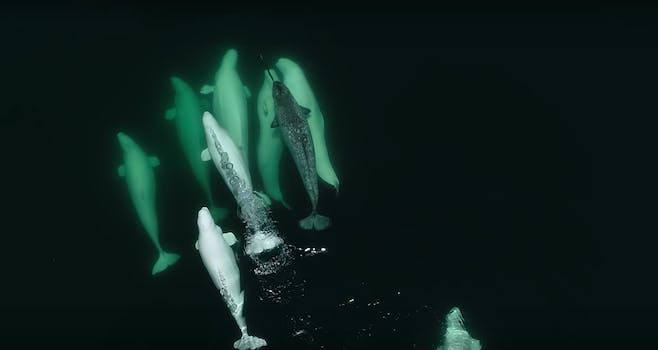 'It behaves like it was one of the boys.'

A single narwhal has been spotted swimming in Canada’s St. Lawrence river, over 1,000 kilometers south of where the animals are typically found. Don’t feel too bad, though—the narwhal isn’t alone. The Canadian Broadcast Corporation (CBC) reports that the narwhal has been adopted by a pod of beluga whales who seem to have accepted the creature as one of their own.

The Group for Research and Education on Marine Mammals (GREMM), a Canadian nonprofit, captured drone footage of the whales with their narwhal adoptee.

The narwhal was first spotted swimming with a large group of over 100 belugas on July 29, 2016. Most recently, it was seen with a smaller pod of consisting of about nine other belugas. Scientist believe all the members of the pod, including the narwhal, to be young adult males.

“They are in constant contact with each other,” said Robert Michaud, GREMM’s president and scientific director. “It’s a like a big social ball of young juveniles that are playing some social, sexual games.”

The narwhal has started acting more like its newfound family, according to the team, and has even been spotted blowing bubbles like a beluga.

“It behaves like it was one of the boys,” Michaud noted.

Narwhals and belugas are actually closely related species, being the only two whales in the Monodontidae family. They are roughly the same size and are both highly social animals.

Martin Nweeia, a researcher at Harvard University who studies both narwals and belugas, said that while the situation might be unusual, he’s not totally surprised by it. He said Inuit people living in the Arctic Circle have a legend about a woman falling into the water while hunting belugas and getting her hair caught on a narwhal horn.

“I don’t think it should surprise people,” Nweeia told the CBC. “I think it shows … the compassion and the openness of other species to welcome another member that may not look or act the same. And maybe that’s a good lesson for everyone.”