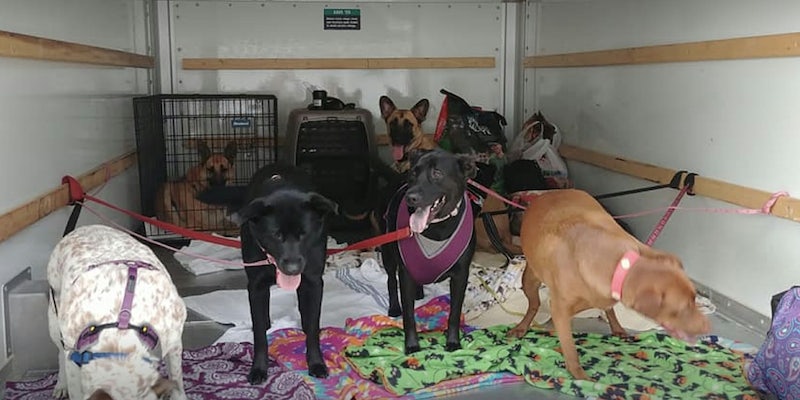 A South Carolina resident was faced with a difficult decision as Hurricane Florence—a Category 1 storm that has been battering the East Coast causing power outages and evacuations—approached. As the owner of seven rescue dogs, Christine Meinhold had the choice to leave them behind to find refuge with her family in Tennessee or risk her well-being and stay put. She did not want to take the risk that her car, which had 250,000 miles on it, would break down on such a long trip and she simply did not have the funds to come up with another plan. In the end, she chose to stay with her pups.

“When I rescued these dogs, I took on a responsibility of loving and caring for them the rest of their lives,” she told CNN on Wednesday.

Luckily, the internet stepped in to help. An outpouring of support came in after learning of the story, with Palms Springs-based radio host Kate Zenna organizing a crowdfunding campaign to help rescue Christine and all seven of her dogs. Zenna, who rescued dogs in the aftermath of Hurricane Katrina and witnessed the storm’s devastation, simply could not leave the animals in harm’s way. She corralled support for the effort through Twitter and Facebook.

We have raised funds and an army of people. Christine is now in a Uhaul on her way to TN! @GianlucaMezzo @CNN @CBCNews @TheEllenShow @Oprah It's happening! These pups will be safe from Florence #florencehurricane #rescue pic.twitter.com/Ay1yGm66ZH

Within a few hours, 16 donors raised enough money to get Meinhold a U-Haul big enough to take all seven of her dogs to safety in comfort. The crowd-sourcing campaign also hopes to secure enough money to buy the dog lover a much-needed new car.

One woman shared updates and photos of Meinhold’s epic rescue. “What a group of humankind that found their way to each other,” she wrote. “One dark and stormy night…15 amazing, kind, compassionate humans came together to make This Happen…Crying tears of joy for this woman…”