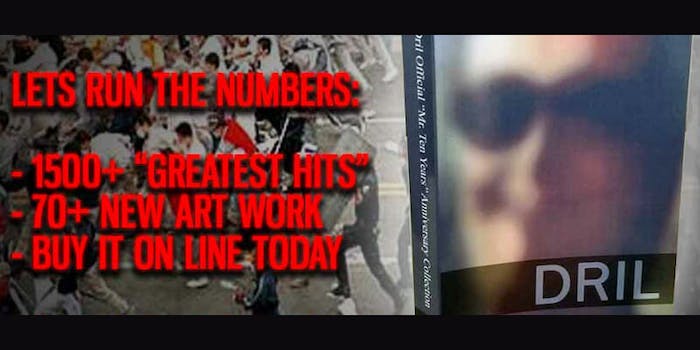 Dril, everyone’s favorite Twitter weirdo, has a book out now

Somebody get a copy to Ice-T STAT.

Anyone who uses Twitter on the regular likely has at least a passing familiarity with the online personality known as @Dril, who has been amusing the internet with his absurdist tweets for the past decade now. A decade, you say? Seems like a pretty big milestone. Indeed it is, and to commemorate 10 years of being the TKO champion of Weird Twitter, @Dril has released a book appropriately called Dril Official “Mr. Ten Years” Anniversary Collection.

No, really, it’s on Amazon and everything—which you can purchase in paperback for $17.99 or download for Kindle (although that option appears to have been removed, at least temporarily).

The description of the book on @Dril’s website, wint.co, reads as follows:

after 10 years, of posting, the Book has arrived at last. Containing over 1500 “Cream of the Crop” tweets, hand picked by The Boss, sorted categorically and accompanied by over 70 stunning Illustrations, this book is a Must Have for all admirers of Prestige Content.

The categories, based on an early look at the e-book, include everything from “ass,” dick,” and “dumb asses” to “beauty & fashion,” “disease & medicine,” and “economy & the markets.”

Don’t feel like spending money on something you can get for free, on the internet? Or as Dril puts it, “books that are mostly filled with Shit youve read before?” “That’s fine. Some say there’s a 2nd book, coming early 2019…” he mysteriously teases on the website.

And there you have it. The Cash Me Outside girl has a legitimately successful music career and Dril is now a published author. What a world we live in.