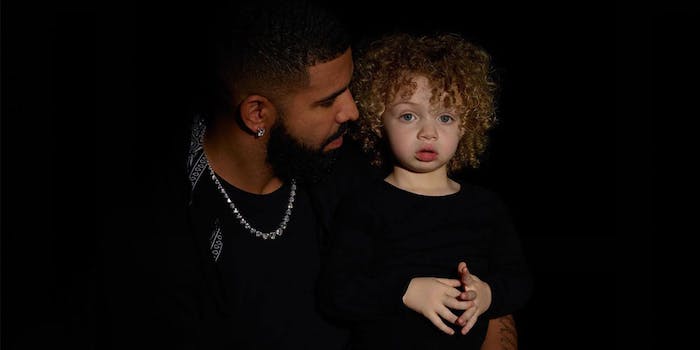 'I love and miss my beautiful family and friends and I can’t wait for the joyful day when we are all able to reunite.'

Drake stayed busy blessing fans with content over the weekend. The rapper appeared on PartyNextDoor’s new album, PartyMobile, released Friday, and while he has yet to release his own “Corona Freestyle,” he did share something early this morning to get fans excited: The first public pictures of his son, Adonis.

The rapper shared several photos of his 2-year-old son on Instagram hours ago, along with photos of Adonis’ mother, Sophie Brussaux, and Drake’s own parents. In his caption, he included words of encouragement for anybody suffering from anxiety or loneliness as they self-quarantine to mitigate the spread of coronavirus.

“What is most important for you right now is to connect to your own inner light,” he began his post. “This will create the biggest opening of all. Trust that you have all of the power within to make this happen, and in order to do that connect to the people and things that bring you a lot of joy. When the mind starts to move into overthinking or fear, shift your attention right away to something bright.”

“I love and miss my beautiful family and friends and I can’t wait for the joyful day when we are all able to reunite,” Drake concluded. “Until then please keep your lights on.”

News of Drake’s son first became public in May 2018 when Pusha T released the excoriating diss track “The Story of Adidon,” in which he rapped, “You are hiding a child, let that boy come home… Adonis is your son, and he deserves more than an Adidas press run.” Drake addressed the situation frequently across his 2018 album Scorpion, rapping on “Emotionless,” “I wasn’t hiding my kid from the world, I was hiding the world from my kid / From empty souls who just wake up and looked to debate / Until you starin’ at your seed, you can never relate.”

Fans were ecstatic to see photos of Adonis, noting his striking blue eyes and luscious blonde curls. Some people also cracked jokes and shared memes about Adonis being white, apparently forgetting that both Brussaux and Drake’s own mother, Sandi Graham, are white. Other users emphasized that making fun of a 2-year-old’s appearance is scraping the bottom of the barrel, even for Twitter trolls.

If nothing else, Drake reminded the world he knows how to make an event out of a single Instagram post. His photos of Adonis have racked up more than 1.75 million likes in just three hours.

Keep spreading love in the time of coronavirus, Drake. The internet demands it.