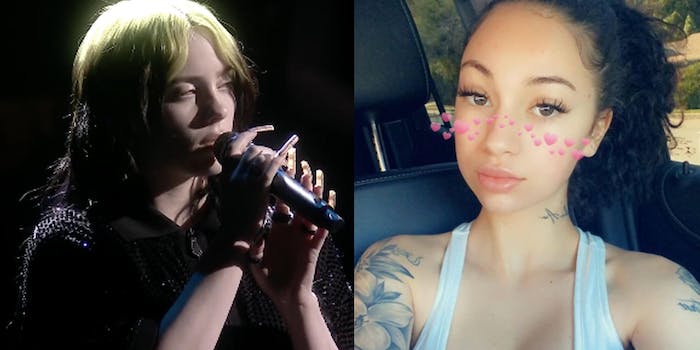 'I guess that’s what happens when b*tches get famous.'

Billie Eilish is having an unnecessarily dramatic month.

Saturday night, the “Bad Guy” singer unwittingly drew the ire of One Direction stans after she liked a silly meme on Instagram joking that Louis Tomlinson is what happens “when you move and the snapchat filter comes off.”

Now, a video is circulating of her friend(? ex-friend? casual acquaintance?) Bhad Bhabie, the rapper still best known as “cash me outside girl” from Dr. Phil, calling her out for not returning her texts.

During an Instagram Live Q&A last Saturday, a fan asked Bhad Bhabie (aka Danielle Bregoli) if she and Eilish are still pals.

“I think I’m friends with Billie,” she replied. “I don’t know if Billie is my friend.”

“Every time I DM her and give her my number, she just doesn’t text me,” she added.

The two were pretty tight back in 2018, even sparking rumors at one point that they might be dating, something Eilish immediately denied via social media, referring to Bhad Bhabie as her “baby sister.”

Eilish and Bhad Bhabie seemed to still be on good terms as recently as September of 2019 when an Instagram interaction between them briefly made headlines.

But now, it would seem that Bhad Bhabie is more interested in slamming Eilish for her success.

“I guess that’s what happens when bitches get famous,” she continued. “It can be like that, I’m not trippin’. I know who my real friends are.”

Fans of Eilish were really not interested in the shade Bregoli was trying to throw.

But with everyone stuck inside for the time being and doing nothing BUT texting, maybe Eilish will finally check-in and put an end to the maybe-feud.

And if not, well, it’s not unfathomable that we’ll soon see Bhad Bhabie back on Instagram Live stirring up more drama, which seems to be the current hobby of far too many celebrities in self-isolation.