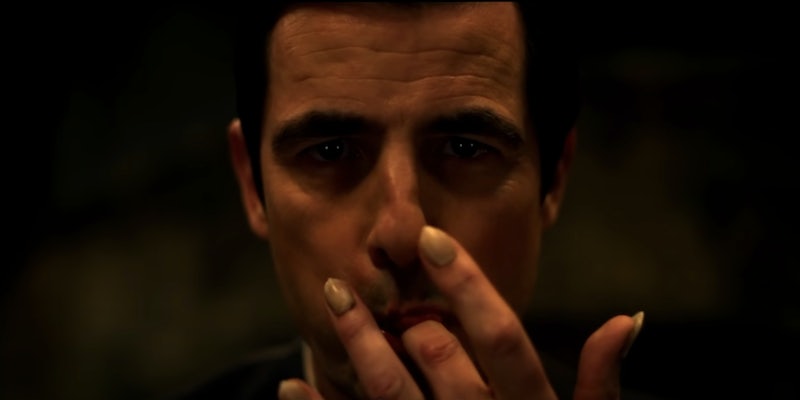 Dracula Daily is the unexpected breakout fandom of 2022. We spoke to its creator to learn more.

To get to the bottom of Dracula Daily’s origins, we spoke to its creator Matt Kirkland, who previously launched such esoteric projects as a made-to-order cuneiform tablet service, and a photo series dissecting the robotic innards of stuffed toys. He seems as surprised by the newsletter’s success as everyone else.

The Daily Dot: Could you tell us a bit about your background? I saw that you’re a web designer, but you also seem to do a lot of these interesting little creative side projects.

Matt Kirkland: I’m a co-founder at a digital product studio, we make custom software. But I spend my nights and weekends doing other strange projects. Mostly I’m just a really big fan of the internet, so I love the power and immediacy of having a dumb idea and being able to put it out in front of people that same day.

What’s your relationship with Dracula? What inspired you to create the newsletter?

I think everybody loves vampires, but the relationship with Dracula really came from the format of the novel itself. I was reading it in 2020, and as I was reading it, I was talking about it with my daughter. She loves stories and always asks me to recap what i’m reading, even boring Victorian novels.

We realized how close the calendar dates were to the dates in the novel because it all happens over a six-month span. And then we just realized like, “Oh, it would be great if you could read it all on the actual dates when everything happened.” Of course, it would be a lot of work and you’d have to use a lot of bookmarks to track through the book. And then like a bolt of lightning we realized, what would be great is if someone just had a Substack where it could just email me the actual passages from the book that day.

I mean, I love the book, I think it’s surprising how different it is from our popular conception of vampires. But that’s about as far as my personal connection to it goes.

So, this is year two of Dracula Daily. What was the response to year one? I get the impression it was more of a niche thing last year.

I set it up in January, queued up all the posts to go out, and then kind of forgot about it. Then in the spring I realized, it’s almost Dracula time! I have to tell people about this! 1,500 people, almost 2,000 I think at one point signed up. I was very excited about it and had a great time discussing things via email… I thought it was kind of, you know, one and done.

But then at the beginning of this year, I thought, “Dracula season’s coming up, I wonder how that Substack’s doing.” And logged back in, and saw people had been subscribing all winter long. I sent out an email and said, do you wanna unsubscribe, do you wanna do this again, and got just hundreds of people that said, “I just joined over the winter and I was really hoping we’d restart.” So then it obviously took off in an entirely different way this year.

Of course, I have to ask, what do your stats look like now? How many people are subscribing? And do you really have any idea what made it go viral?

Well, we just crossed 200,000 people subscribed. I’m floored by that of course. And I really don’t know, I mean, I don’t have analytics or trackers on this, but you get a little data about where things are shared. I think there were a lot of social shares at the beginning, where people realized like, “This should be fun, obviously it’s a lot more fun if I can talk about it with friends.” So people did a lot of sharing in advance before the story really started. And then on the first day it really exploded on Tumblr, with just a hilarious response.

In terms of the Tumblr fandom, obviously, that’s the main driving force now. Do you have any favorite memes or commentary? Had you really experienced this kind of Tumblr fandom elsewhere?

I’m not in a fandom in a Tumblr sense, but I’ve adored following it. I’ve stalked the hashtag, and just every night for a week, I read every post and cried to myself laughing. The first round of jokes, like “Poor sweet Jonathan,” and how he cant handle paprika, were just amazing. And then people really began picking up on the sitcom elements of Dracula doing all the housework and pretending like he’s not doing it. That had never really rung out to me as very funny before, when I had read the book, and so those were just hilarious to me.

It’s kind of reflected back on you and maybe changed your experience of how you view Dracula.

Would you do something similar with another book?

Yeah! I mean, if I can find the right book I would love to. A lot of people have suggested Frankenstein, which feels like a natural next one, but it comes in really long passages so I’m not sure that’s a great fit. But I really enjoy reading a book this way, where it’s spaced out. The timing gives you a little more time to inhabit the characters.

I’ve had people email and say, “This is great but I feel like I’ve missed out because you’re already a week in.” And I just wanna tell everybody it’s not too late, it’s easy to get caught up and then you’ll get to be on the Dracula train with everybody else for the rest of the book this year.