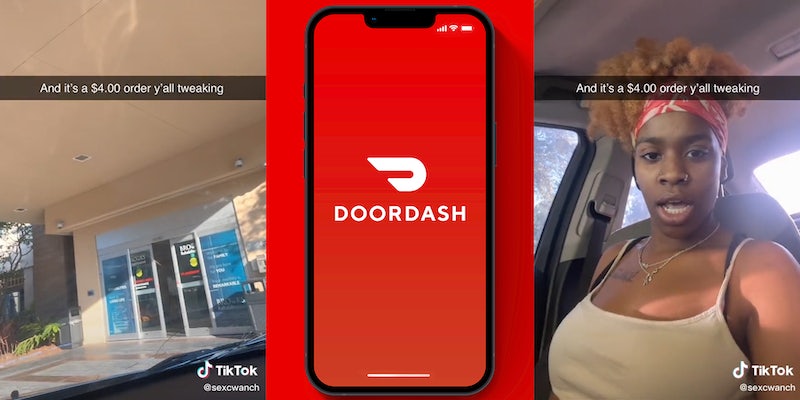 'This sh*t gonna be out on the f*cking sidewalk.'

A DoorDash driver went viral for her rant about a customer who ordered Papa John’s from the hospital.

The customer, the DoorDash driver claims, expected the driver to find the hospital room they were in. The driver, who posts on TikTok under the handle @sexcwanch, on the other hand, didn’t want to go inside of the hospital with the customer’s food and expected them to meet her outside instead.

She says in the clip that “this is another reason why I cannot fuck with DoorDash.”

“Why the fuck I’m at the hospital right, OK, whatever. This bitch talking about some room 2, room what, room who? Bitch I’m not going into no hospital to deliver no fucking nasty, sloppy-ass Papa John’s. You got me fucked up. You better bring your ass out, or this shit gonna be out on the fucking sidewalk. I’m not going,” she says.

While many agreed with the driver, some TikTokers criticized the DoorDash driver for complaining.

“They have the AUDACITY to tip $2 and they want you to walk to the other side of the hospital through a maze to find their room. PLS,” one said.

“With that attitude you need to quit! I hope they don’t tip you either cuz I sure wouldn’t,” another said.

Many DoorDash drivers have expressed their dissatisfaction with the application’s payout structure, especially when gas in the United States reached an all-time high in 2022, leaving many drivers just breaking even financially at the end of a work day, or making below minimum wage when expenses are factored in.

Vox also reported in March that DoorDash was under investigation in San Francisco for its labor practices and payout structure: “If DoorDash is found guilty of violating San Francisco’s labor rules, it could be ordered to pay restitution and fines, and forced to change its policies,” Vox reports.

The Daily Dot has reached out to @sexcwanch via TikTok comment for further information.