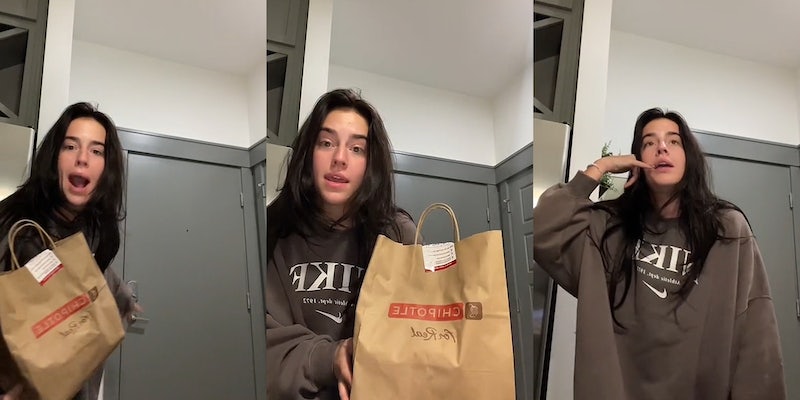 'Now that I think of it, I’ve never had a lady have an issue with my address.'

The concept of ‘weaponized incompetence,’ where people (usually hetrosexual, cisgender men) would pretend to not know how to do a task so that the other person can do it, is well-known on TikTok. Though, it’s usually being used within the context of household chores and childcare duties for couples.

As this viral TikTok shows, weaponized incompetence isn’t exclusive to people in relationships. It can even form part of the gig economy.

The video, posted by user Ally (@ally_yost), involves her pointing out the difference between men and women who deliver for DoorDash.

“Listen, I hate to say it because I know I’m a woman and all,” she begins. “But every time I get a Door Dash woman, she has no problem figuring it out getting into my apartment and dropping it right off at my door. Bless her heart. I’ve given her an extra tip for that.”

However, Ally claims men always have a little more trouble figuring out how to drop off her order.

“But I’m telling you, every time I have a man dropping my food off it’s all, [imitates talking on the phone] ‘Okay, yes, sir. So first you have just go into the- okay, you’re gonna see an elevator right in front of you…'” she says.

“And a woman can just…” she adds, pointing to the door.

I mean i dont think its a coincidence

“I mean, I don’t think its a coincidence,” she wrote in the caption of the video, which has amassed over 340,000 views.

In the comments, other users shared their own stories of deliveries gone wrong—that they attribute to the male gig workers who pick up their orders..

“I had a man leave my food on top of a mailbox on the opposite side of my complex because he said he couldn’t find my door,” one recounted.

“I get so mad when a man picks up my InstaCart order,” a second added. “I request a banana and they replace it with a screwdriver.”

A third commenter compared getting a male InstaCart driver to “pulling teeth.”

Others said that Ally’s video led them to make realizations about their delivery history. “Yeah I mean now that I think of it, I’ve never had a lady have an issue with my address. Only the lads,” one user wrote.

The Daily Dot reached out to Ally via an email to her management team.