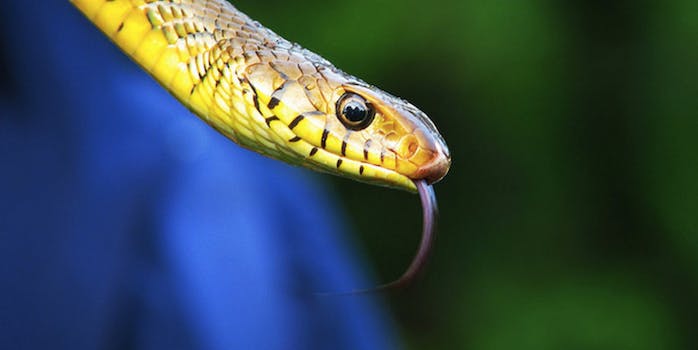 Photo via I for Detail./Flickr

‘Snek’ is the slithering, scaly, surprisingly adorable heir to Doge

Heck off, I'm doing a shed.

Picture someone who owns a pet snake.

I used to picture a men’s rights activist with a room full of replica swords, or the evil neighbor kid from a movie about suburban ennui. I thought pet snakes were for deviants who’d pulled the limbs off all their other pets. Snakes have a PR problem. The solution? One word: snek.

Snek is a meme about snakes, and it’s spreading across Facebook, Reddit, Tumblr, and FunnyJunk. Some strong examples:

Snek, which according to Know Your Meme first appeared in autumn 2015, has fairly loose rules. Its captions use cutesy language like LOLcats, but they’re sprinkled around the image, as with doge. Its most distinguishing grammatical quirks are the use of “heck” to replace other profanities (resulting in phrases like “heck off” and “hecking”) and the phrasal template “doing a [verb]”.

This tone is not just disarming and hilarious, it’s also great branding for snakes. Snake lovers have called the animals “sneks” for years. Tumblr’s #snek tag is full of snake owners describing their pets as “danger noodles,” “long dogs,” and “smol babies.” They talk about snake yawns and booping their snakes’ snoots. They call them “dorks” a lot. (They even sometimes take their snakes out for a beer and a swim.)

And they always defend their snakes as a cute, cuddly pet on par with your typical cats and dogs:

Snek Tumblr is a fantastic way to normalize snakes. These aren’t freakish reptiles hiding in our plumbing or stealing our eggs. And their owners talk about them exactly how the rest of us talk about our cats and dogs: Dumb goofy animals whose predatory instincts now manifest only as adorable tomfoolery. This one tends to eat rodents, but let’s not pretend our dogs are vegans.

Internet linguist Gretchen McCulloch, who broke down the grammar of doge in 2014, sees a linguistic connection between snek’s “doing a [verb]” and doge’s “very [noun]” and “much [adjective]” formulations.

“They’re both examples of ‘selectional restriction mismatch’ where people put a type of word in a place where it doesn’t normally belong… I’ve called this ‘stylized incoherence mirroring emotional incoherence’ and I do think snek fits into the larger family of incoherence when it comes to animal memes in particular,” McCulloch told the Daily Dot.

While the “doing a [verb]” construction also appears in the dog-based meme “Stop it son, you are doing me a frighten,” its killer application is rendering snek’s language childlike and pretentious. Doge’s emotional incoherence is an overwhelming surprise and awe. Snek’s is that of a child pretending to be an adult, mimicking mom and dad’s words, asking you to heck off while it does a shed. Snek is like the boy who wanted cookies telling his mom, “Linda, honey, listen,” adopting adult language and emotional signals while still not daring to swear.

The faux-fierce snakes of snek reminded me of two pieces from humorist Mallory Ortberg: the “Text Messages from a Ghost” series, and “Texts From a Tiny Glow-in-the-Dark Shark.” Ortberg’s shark calls itself “fiercerocious” and demands, “are you joking at me?” I showed her some snek pictures and asked her about the common thread.

“I love so much,” she said, “of how this seems to be about something small and ferocious trying to maintain its dignity and trying to inspire fear or at least respect. A tiny snake that’s a parody of what a real snake can be: biting you but not hurting you, insisting that ‘i am darkness.’ That’s always funny, the defensive little guy. And when you add warmth and sweetness to it, it’s even funnier.”

Without even hearing about snake owners and their “noodle” and “long dog” nicknames, Ortberg created a new one:

“A snake is inherently comical. But when you remove size and poison from it, it’s comical and pathetic. No longer a big dick with fangs. Just a little fuckin’ ribbon with eyes.”

A ribbon! Snek gets everyone talking in the same terms as snake owners. Snek is more than fiction; it’s propaganda that makes me feel friendlier toward real-world snakes. So when someday I get bitten after reaching my hand into the zoo terrarium and cooing, “Come cuddle, my wee rubber shoelace,” you’ll know why.

Snek is still a wee little meme with scattered instances. Regular sources include the Snek Facebook page and a whopping three snek subreddits: /r/snek, /r/sneks, and /r/snek_irl. The Tumblr #snek tag is a general jumble of pet-snake discussion, but a lot of good snek cartooning starts there. Like a freshly-shed long dog, this meme has plenty of room to grow.

So keep on slitherin’, little sneks. You’ll hiss your way right into our hearts.