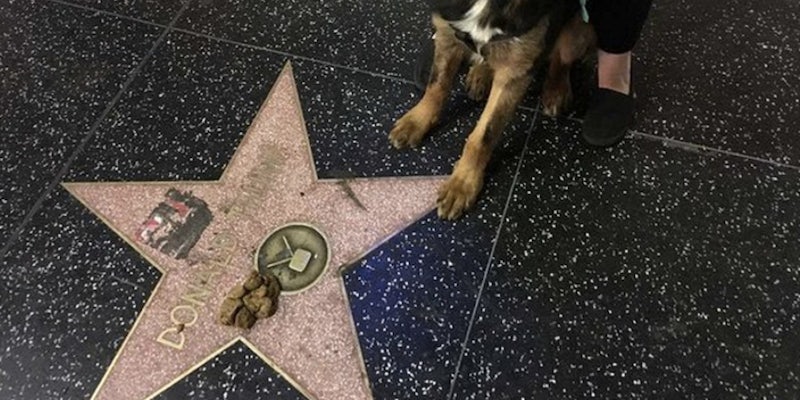 A lot of people really dislike Donald Trump, to the point where they’ll happily go to the trouble of erecting a tombstone in Central Park in his memory or sending him a bag of dicks. But for some folks in Los Angeles, these harmless pranks just aren’t enough.

If you really want to remind Trump that he’s the worst guy on the planet, you might consider peeing (or shitting) on his Hollywood Walk of Fame Star. Or hell, deface it however you want: The past few weeks have seen some pretty creative “protests.”

I spit on Trump's walk of fame star pic.twitter.com/BJ66IiGbQt

i can't tell if she's pooping on donald trump's star or just giving it the finger #tourists #hollywood pic.twitter.com/p8tfL24rvh

This service dog deserves all the dog treats, for not only being a great companion, but for taking an epic shit on a man many would describe as piece of shit in his own right.

Props to whoever did this, also:

I didn't even know Trump had a star on the Walk of Fame, but we discovered it this weekend… covered in urine. pic.twitter.com/bTTu0FvXuj

Trump’s star—which he received in 2007 for briefly forcing the country to care about The Apprentice—likely won’t be removed despite the vandalism.

“Once a star has been added to the Walk it is considered part of the historic fabric of the Hollywood Walk of Fame,” Leron Gubler, Hollywood Chamber of Commerce president and CEO explained. “Because of this, we have never removed a star from the Walk.”

Guess we’ll just have to cross out the “Trump” part and write in “Sutherland.”