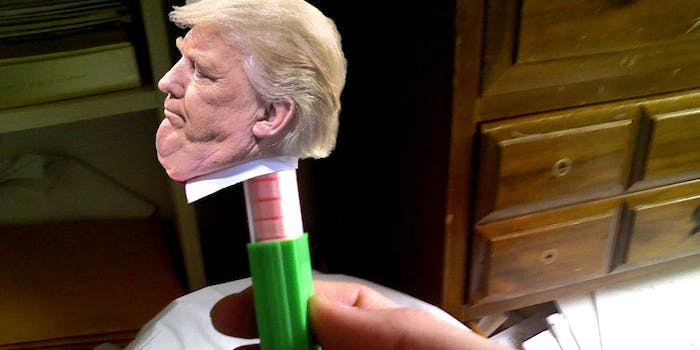 The nations’ apparently thin-skinned president-elect has been none too happy about the media’s use of unflattering photos. Donald Trump recently urged NBC News and other outlets not to use certain photos of him: Everyone has a bad side, and Trump’s happens to include a double chin.

This initially prompted the internet to share those photos incessantly, attaching hilarious hashtags and comparing the Donald to other less-than-aesthetically-pleasing animals.

Apparently Donald Trump is very upset @NBC used an unflattering photo of him.
Anyway, here's him and a pelican.
Please don't RT. pic.twitter.com/6IAaSYKpzc

One such photo made its way to Reddit‘s r/photoshopbattles. Turns out Trump’s seemingly melted face pairs perfectly with candles, tubular sausages, and even sumo wrestlers.

There’s something larger than life and altogether unreal about Trump’s face. Naturally, it lent itself perfectly to iconic characters from Lord of the Rings, Star Wars, and The Hitchhiker’s Guide to the Galaxy.

In fact, an entire movie could be dedicated to the mass that is Trump’s face.

There’s no better place a bloated, tumorous Trump photo belongs than his own Twitter account, however. Juxtaposing some of Trump’s own words against flag burning with the very Photoshop battle itself.