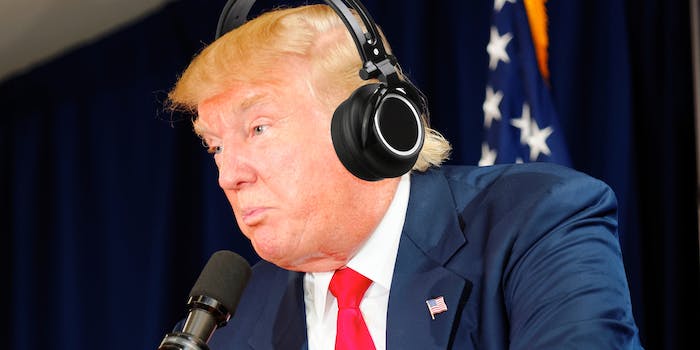 On Thursday, President Obama released his official summer playlist, featuring a bunch of fire tracks (plus Edward Sharpe and the Magnetic Zeroes). For the next five months or so, the United States has a president who bumps Jidenna and Janelle Monae. It’s easy to take that for granted.

Consider that under a Donald Trump administration, our national summer jams would sound very different.

Leading America into an alternate reality where disco never won, President Trump’s rockist musical platform would offer a mix of opera, white guys with guitars, Kenny G, and Adele. Poptimism, like optimism, is not a major part of his repertoire. (Trump has expressed his admiration for King of Pop Michael Jackson, but one gets the impression he’s more attracted to the “king” than the “pop.”)

We’ve compiled Trump’s theoretical playlist based on his current and past statements about artists he likes, as well as the campaign rally soundtrack he reportedly compiles himself.

According to Rolling Stone, “Trump has name-checked Aerosmith, Elton John, Paul McCartney, and Michael Jackson in the past,” and has crammed his campaign playlists with classic rock. The Rolling Stones’ “Brown Sugar” and Twisted Sister’s “We’re Not Gonna Take It” are fixtures.

Trump was seen dancing a little bit upon hearing the Stones’ “Start Me Up” at a North Carolina rally:

And Jagger and Co.’s “Let’s Spend the Night Together,” “Mother’s Little Helper,” and “Time Is On My Side” are also in the rally playlist rotation, the Washington Post reported. “Sympathy for the Devil” also makes regular appearances. Hmm. :thinking emoji:

Bruce Springsteen’s “Born in the U.S.A.” has been (mis)used by politicians for as long as it’s been around, so it’s hard to say whether Trump is truly a fan or the song is just a pro forma inclusion. Besides, Trump’s lackluster hype man, New Jersey governor Chris Christie, loves the Boss enough for both of them.

Likewise, Frankie Valli’s “Big Girls Don’t Cry,” may have been more of a dig at President Obama than a choice made out of love for the music.

Trump’s boundless affection for music by white guys doesn’t stop there, though. The Post notes he’ll play the Beatles’ “Hey Jude,” Survivor’s “Eye of the Tiger,” and tunes by the king of inoffensive jazz, Kenny G.—Obama, by contrast, had Mingus on his playlist.

Neil Young is (was?) perhaps Trump’s favorite artist, although they couldn’t be further apart politically. Young, a Bernie Sanders supporter, told Trump “fuck you,” and demanded he stop playing “Rockin’ in the Free World” at events. Trump continued to do so, arguing that he paid for the appropriate licenses.

Before their falling-out, the Donald gushed about Young’s live performances. Back in 2006, he told Rolling Stone, “I went to the concert where they were honoring Bob Dylan years ago at Madison Square Garden and Neil got up and totally brought the house down. There was nobody close. He’s performed for me at my casinos over the years and he just brings it down. I’ve met him on occasions and he’s a terrific guy. … His voice is perfect and haunting.”

Trump added that he likes “the older stuff better,” though, so we’ll go with whatever early-’60s Young is available on Spotify instead of the 1989 “Free World.”

Trump has also been spotted at an Adele concert, perhaps the most contemporary artist in his repertoire. He played her “Rolling in the Deep” and “Skyfall” at his rallies before she, too, repudiated him.

When he stretches outside of the rock arena, Trump mostly seems to enjoy showtunes, opera, and classical music. The Washington Post guide to his musical taste notes he’s drawn on Les Mis, Cats, and Phantom of the Opera during his campaign. Trump loves him some Andrew Lloyd Webber.

Not everything Trump enjoys is by white folks, though. He’s also into Northern Soul. Kind of. Trump recited the lyrics to Al Wilson’s 1968 jam “The Snake” at one rally. But in his reading, the snake in the song represents Muslim refugees, who he hopes won’t “bite” Europeans.

You’re not exactly scoring any points for creative diversity there, my dude.

Likewise, the hip-hop tracks Trump has cited favorably are the ones he feels support the message of his own greatness. Bloomberg reported in 2015 that Trump got so excited about Mac Miller’s “Donald Trump” that he knocked over an employee’s computer monitor while trying to show it off on YouTube.

Two years before that, though, he told Miller to “kiss my ass!” on Twitter.

It was just announced that @MacMiller’s song “DonaldTrump” went platinum—tell Mac Miller to kiss my ass!

And then of course there’s Travie McCoy and Bruno Mars’ “Billionaire,” played at rallies for obvious reasons. It’s basically a soft-rock jam with a couple of rap verses by Travie, but by Trump standards it’s positively hardcore.