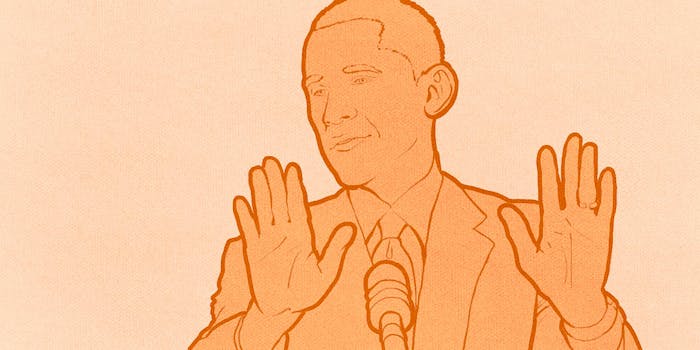 What's on it this year?

Summer is nearing its end and President Obama is continuing his own nerdy tradition of releasing his summer playlists for avid music buffs to spin and judge.

He started publishing his playlists on Spotify—one for daytime and one for nighttime listening—last summer and provided plenty of fodder as his fascinating curation of music proved to be an even better Netflix and Chill list than Spotify’s own version. This year’s selection of music is no different, which he dropped on Thursday.

Been waiting to drop this: summer playlist, the encore. What's everybody listening to? pic.twitter.com/mqh1YVrycj

The daytime list is the sort of thing to get you pumped featuring an eclectic mix from the Beach Boys to Sara Bareilles, Nina Simone, Janelle Monáe, and Gary Clark Jr.

While last year’s nighttime playlist was a fitting “let’s get down” set, this year’s is a lot calmer as Obama, another year into this president gig, winds down at the end of the day with his seven almonds. With soothing tunes from Corinne Bailey Rae, Janet Jackson, Anthony Hamilton, Fiona Apple, and Miles Davis, he’s well on his way to a hopefully peaceful night.

They’ve got some familiar names and songs—Aretha Franklin’s “Rock Steady” made the cut from last year’s Day playlist—and Simone, Davis, and Rae all make their second appearances on Obama’s playlists.

We do have one quip. Like every other Spotify playlist, he uses the wrong version of Method Man and Mary J. Blige’s “All I Need.” But we can’t blame him: The superior Razor Sharp remix isn’t even available on the streaming service.