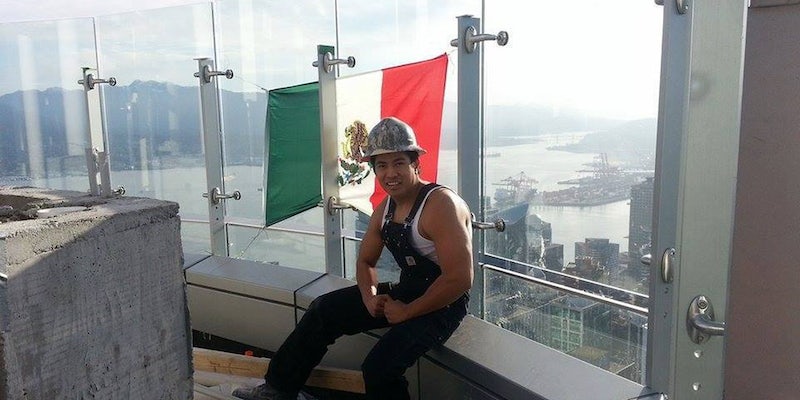 He's trying to get Trump's attention.

For a brief period of time this weekend, the Mexican flag hung at the top of the Trump Tower in Vancouver, Canada.

While it might have just been there momentarily, construction worker Diego Reyna hoped to stick it to the man whose name adorns the project.

In the picture he posted to Facebook, Reyna sits on a ledge in front of the flag while giving us a smile and a little flex action. He explains that he brought the symbol to the top of the construction site to push back against Donald Trump‘s negative comments about minorities and to show that Mexican workers play a huge part in the building of the tower.

“Because from the concrete pouring, finishing, drywall, taping, wood forming and general labour, Mexicans were there, building it, doing good work,” Reyna writes. “the comments Trump has made about us, did not stop us from doing the high quality work we have always done, in our home country or when we migrate to the US/Canada.”

Reyna posted the photo on Saturday, and as of Monday morning, it had more than 1,600 shares and a flurry of comments. Many have lent Reyna their support, while others have offered their own opinions about Trump’s immigration comments.

Trump has made several sweeping generalizations about Mexicans, calling them rapists and suggesting that he’d like to build a wall along the U.S.-Mexico border.

Reyna doesn’t work at the Trump Tower construction site, but he told Huffington Post Canada that he has Mexican and Muslim friends who do and who are frustrated and upset that they can’t say anything. That’s why Reyna stepped in and hung the flag. He also said, “I’m not concerned about Trump rising to power. I’m concerned about his values and his points of view extending to our country.”

This isn’t the first time that Mexicans have used Facebook to flag Trump’s attention. Last June, Adriana Almanza wrote an open letter to the presidential candidate that went viral with more than 340,000 likes.