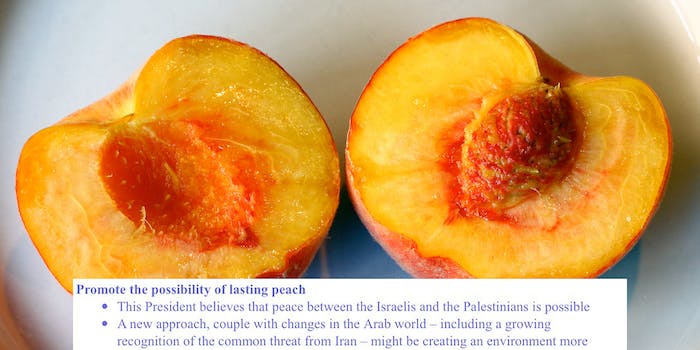 The smallest things can change the course of history.

And in an effort to end decades of conflict between Israel and Palestine, President Donald Trump may have instead kicked off a global effort to end world hunger.

What’s that, you say? How? How is that even possible?

Well, no idea, fam, because the “e” and the “h” on a keyboard ain’t all that close. But in a press release about his upcoming visit to Israel, Trump’s team said that, instead of “lasting peace,” they will seek “lasting peach.”

Also, there’s a whole other typo in there as well. In the very first line (Israeli’s). The president, the possessive, and the peach. It could be a kid’s book one day.

There were lots of tweets about lasting peach, but this one was the funniest.