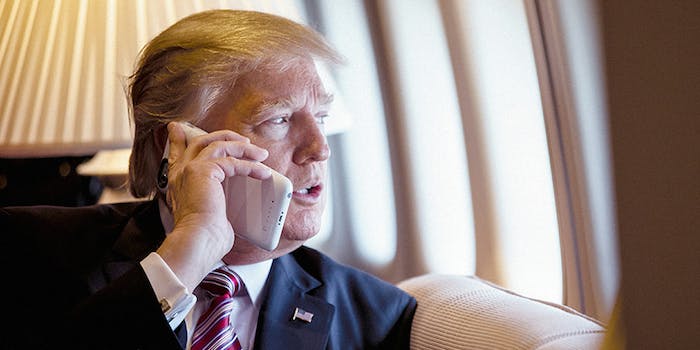 One of the pleasures—indeed, the main pleasure—of traveling is to get outside the comfort zone you know and immerse yourself entirely in another culture.

When you go to a new country, it’s much more fun to just let go and experience it on its own terms, as opposed to trying to keep some semblance of how you did things back home.

It’s daunting, but it’s how you learn and grow as a person.

Case in point: President Donald Trump, who is leaving the United States for the first time as the leader of our nation, heading to Saudia Arabia and other Middle Eastern countries.

And he’s making sure American creature comforts are with him every step of the way, per the Associated Press:

In Saudi Arabia, people with knowledge of the planning for Trump’s trip say the caterers are planning to offer the president steak and ketchup alongside the lamb and hefty portions of rice on the menu.

The AP claims that Trump will supposedly sample the local cuisine, but that the mercurial president will need to be coddled throughout his nine-day trip. In every way possible.

And if he isn’t, no one knows what will happen. Via AP:

Even before Trump’s trip morphed from a quick jaunt to Europe into a nine-day behemoth, White House aides were on edge about how the president would take to grueling pressures of foreign travel: the time zone changes, the unfamiliar hotels, the local delicacies. Two officials said they feared that a difficult trip might even lead the president to hand off future traveling duties to Vice President Mike Pence.

Trump is even refusing to visit a historic site in Israel because he isn’t allowed to land his helicopter on it.

The president was set to visit the fortress at Masada, a UNESCO World Heritage site. When told he could not fly to it, as it might damage the fortress, Trump canceled his visit entirely.

Previous presidents have ridden the cable car up the mountain to view the site, which was built by Herod the Great.

Meanwhile, leaders meeting with Trump for the first time are being prepped on the behaviors necessary to keep the president focused on matters as trivial as international relations, the world economy, and national security.

Here’s the money paragraph from the New York Times:

After four months of interactions between Mr. Trump and his counterparts, foreign officials and their Washington consultants say certain rules have emerged: Keep it short — no 30-minute monologue for a 30-second attention span. Do not assume he knows the history of the country or its major points of contention. Compliment him on his Electoral College victory. Contrast him favorably with President Barack Obama. Do not get hung up on whatever was said during the campaign. Stay in regular touch. Do not go in with a shopping list but bring some sort of deal he can call a victory.