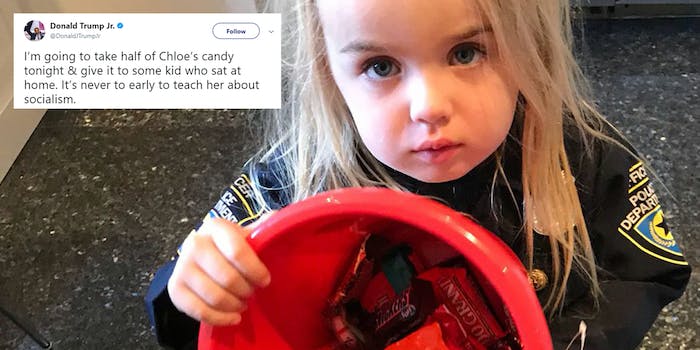 Is Halloween capitalist? It's not.

It’s never too early to start teaching your children about the perils of the real world.

Last night, for example, Donald Trump Jr. thought that he could use Halloween to show his child that the bogeyman is real, and its name is socialism.

Trump Jr., President Donald Trump‘s oldest offspring, was saying socialism is inherently unfair, but he’s using a willfully malignant interpretation of the political theory. It’s not that Chloe’s candy would go to people who just sat home, but perhaps it would go to kids whose parents were too poor to afford costumes for their children, so they couldn’t go out and get candy.

Wouldn’t that be great and nice?

But anyway, Halloween isn’t even the capitalist ritual he’s making it out to be, because:

This could also be a moment to teach her about just generally being nice and not hoarding wealth.

Hey, you jerk. Maybe teach her to share with less fortunate kids who didn't grow up wealthy real estate heirs simply by being born. https://t.co/THMiwhF1qR

A lot of people figured a young Trump Jr. maybe never got a similar explanation many years ago, so they let him know some things maybe he should have been told.

I'll promise a kid 20 pieces of candy for cleaning her room then only pay her 3. It's never *too early to teach her how Trumps do business. https://t.co/OOmx4qXIi6

Fill her bucket with old candy left by her great-grandfather, then explain that she has more because she's smarter than all the other kids. https://t.co/0lbhHYyFe4

I'll take 1/2 my kids candy, store it in a Cyprus tax shelter, then declare bankruptcy to teach her about capitalism https://t.co/7OAOjFYjQx

Others just didn’t know why the Trumps, who have repeatedly bashed the media for discussing the president’s youngest, Barron Trump, would use their own children as props in the fight against concepts like universal healthcare.

“Don’t bring the kids into it. kids are off-limits." https://t.co/aR48VBhHcZ

Either way, this, amazingly, isn’t the first time Trump Jr. has resorted to using candy to explain policy. Back in September 2016, he infamously used a bowl of Skittles to demand the U.S. stop accepting Syrian refugees.

The man loves his candy metaphors, and nobody can take that away from him.