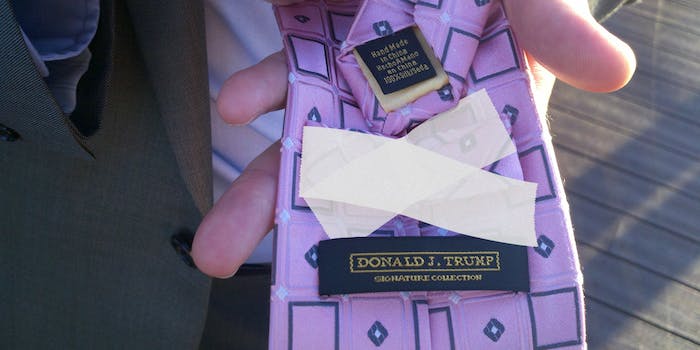 Donald Trump’s flapping, Scotch-taped tie is 2016 in one picture

For so much of 2016, the operative metaphor for the year’s events has been a dumpster on fire. By now, it’s been overused to the point of cliché—we can’t even smell the flaming rubbish all around us anymore. It’s time for a new visual metaphor, so it’s a good thing President-elect Donald Trump holds his necktie together with Scotch tape.

If there was ever an image that says things are hanging by a thread, on thin ice, about to go off the rails, or other idioms for a precarious state of affairs, it’s the future U.S. president, who has his own line of neckwear, barely holding his tie together.

Trump’s kludge was exposed by the wind as he arrived at the Indiana Carrier plant where he just negotiated subsidies to save some of the jobs the company plans to outsource.

Dude, you have your own branded tie-clips. This embarrassment could have been easily avoided.