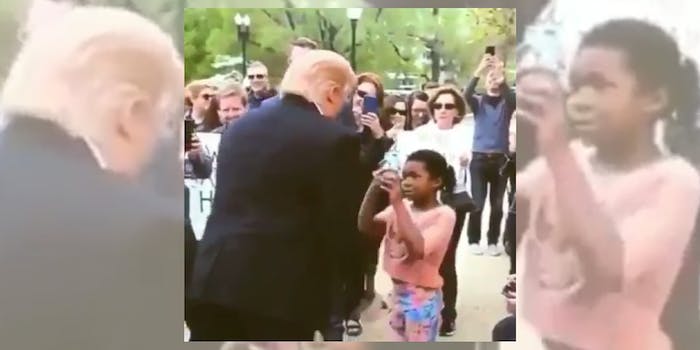 Yesterday evening, Twitter was set alight by a little girl hero, who apparently finally put the president in his place.

As dunking on Donald Trump is practically the national pastime on Twitter, the clip instantly went mega-viral, with nearly a quarter million people favoriting her saying “you’re a disgrace to the world.”

Unfortunately, much like the myth of the little girl on Wall Street, this, too, was not what it seemed.

The girl was speaking to a Donald Trump impersonator, Anthony Atamanuik, who has a show on Comedy Central.

I'm the guy playing Trump from the @PresidentShow and that little girl was brave, funny and smart. Also, she said that if her own volition.

Atamanuik was responding to Twitter users who thought the entire thing might have been a staged sketch for his show. It was part of the show, which aired on Thursday. But this interaction, he said, was completely spontaneous.

Even though it wasn’t said right to POTUS’s face, people found pleasure in it, possibly because so many people want to do what she seemed to have done.

I think some people still like it because it was a very cathartic moment. We aired this Thursday on @PresidentShow So, today was a surprise

Creative Twitter users still found a way to twist it into a shot at the president.

You can tell it isn’t Trump, because after she said that to him, Trump would have basically blown her off, not try to make nice w her.

You can tell it isn't Trump because he already got elected so no need to hug black children for views.

You can tell it isn't Trump because they're not on a golf course.

Never underestimate Twitter’s ability to find a silver lining of a joke in anything.