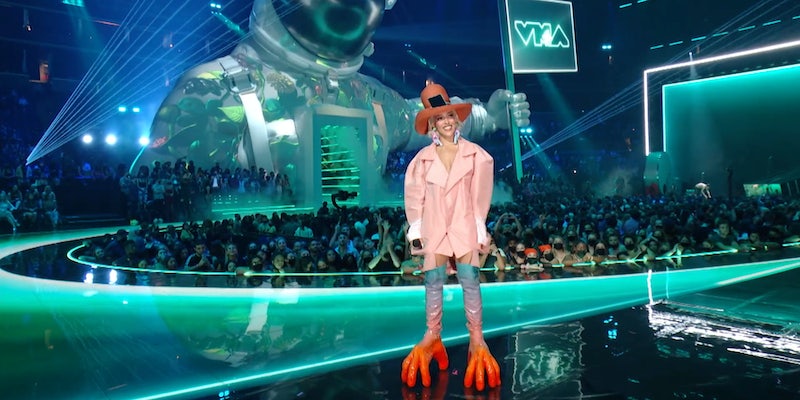 The jokes quickly left the coop.

As the host of the 2021 MTV Video Music Awards, Doja Cat wore plenty of eye-catching outfits with each one topping the next, but it’s her final outfit that’s ruffling a few feathers.

During the ceremony Sunday night, Doja Cat donned a variety of bold outfits that looked like they came straight off the runway. One of them had her wearing a chair as a hat; another one made her look like a worm. It’s the VMAs, an awards ceremony that has notoriously pushed the limits on fashion—as an example of one of the more memorable outfits, Lady Gaga’s infamous meat dress was worn at the VMAs in 2010—so pretty much all of it (even the chair hat) made sense in a way.

Her final outfit, which she wore after Machine Gun Kelly’s performance, follows a similar pattern. Part of the outfit looked like your standard runway fanfare: a gallon hat, a suit jacket worn like a dress. But when you get to her boots, that’s when things get interesting.

The knee-high boots are shades of pink, blue, and orange, but what makes them so unusual is the heel. Instead of a wedge or a stiletto to give the boot its arch, it relies on numerous points to boost her height. And there’s really no getting around it: The boots look like a set of chicken claws.

Impractical? Absolutely. But you can’t deny, no matter how you feel about them, that they’re showstoppers.

And soon enough, the chicken jokes left the coop.

As screenshots of Doja Cat’s footwear went viral, a tweet from @M4kkTruck that stated, “streets saying dojas wearing these” to the VMAs along with two photos of the same knee-high claw heels resurfaced.

While we have to wait a full year to see what kind of fashion celebrities bring to the VMAs, next year’s host has their work cut out for them if they’re even remotely contemplating outdoing those talons.