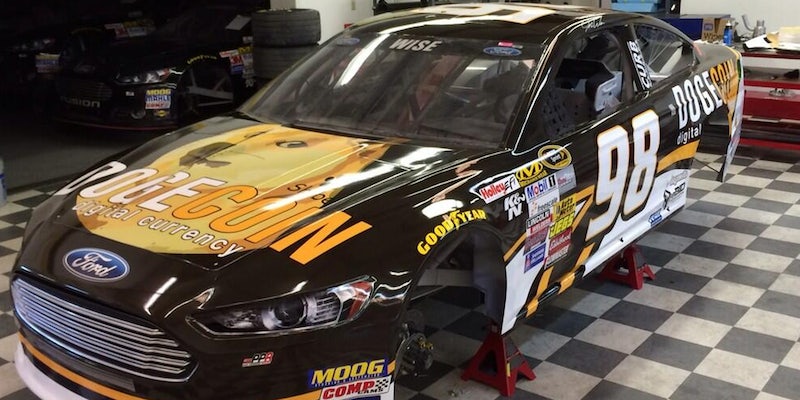 The Dogecoin car is coming to the official NASCAR video game

Soon you'll be able to download and drive your very own Dogecoin car.

Okay all you Shiba Inu lovers, your enthusiasm knows no bounds. The dog that’s the face of its very own crypto-currency has its own NASCAR racing car. And now that car is going to be making an appearance in the upcoming NASCAR ‘14 video game.

NASCAR has seen a spike in popularity amongst younger viewers with the introduction of the Dogecoin NASCAR. Driver Josh Wise’s car, with the help of Reddit‘s Dogecoin comunity, made it into the NASCAR All Star-Race with the Sprint fan vote.

Ed Martin is the Executive Vice President of Eutechnyx, the development team behind NASCAR ‘14. In an interview with CNN he said that “I think it will bring NASCAR to the attention of a lot of people that haven’t been exposed before.”

The game, which was released back in February for the PS3 and Xbox 360, will release the car as a downloadable add-on later this year. Publisher Deep Silver has yet to confirm a release date.

And if you’re planning on converting your Dogecoin to dollars to download the digitial Dogecar, the current Dogecoin exchange rate will net you $46 for 100,000 Doge.