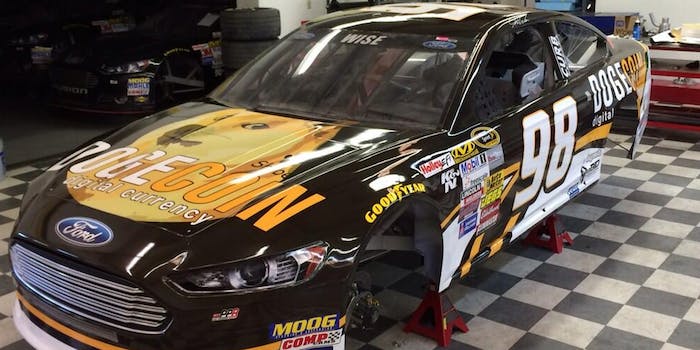 Driver Josh Wise, who has never won a race, earned entry on Friday into the NASCAR All-Star Race by beating out 29 other drivers—including extremely popular drivers like Danica Patrick—to win the Sprint Fan Vote.

An easy-going underdog, Wise wouldn’t have been a contender in a NASCAR fan popularity contest even just a few months ago, but that was before Dogecoin users, one of the Internet’s most-supportive communities, adopted Wise as their own.

The @reddit / @dogecoin community has spoken! @Josh_Wise has been voted into the #NASCAR #SprintAllStar Race! https://t.co/ZEYCBksSR5

Dogecoin is a cryptocurrency, somewhat like Bitcoin, but it’s centered around Doge, a light-hearted meme that features a grammatically-challenged Shiba Inu with a quizzical look on its face. The Dogecoin community has distinguished itself with extreme generosity, enthusiasm, and love for anyone who represents Dogecoin. In March, Dogecoin users banded together to raise $50,000 worth of Dogecoin to sponsor Wise’s #98 car.

To give an idea what kind of accomplishment it was for Wise’s to win the fan vote, NASCAR, in recent years, has been called the number-one spectator sport. In 2012, Forbes reported that 17 of the 20 most-attended sporting events in the U.S. are NASCAR events, and NASCAR races are broadcast in 150 countries.

“Josh Wise winning the Sprint Fan Vote is a remarkable story that speaks to the passion, strength and breadth of the dynamic community of Dogecoin followers,” NASCAR spokesman Kerry Tharp told the Daily Dot in an email.

Here’s an incredulous Wise, thanking Reddit and Dogecoin users, upon learning of his victory on Friday evening.

Reddit got a shoutout because it has been the main gathering place for the Dogecoin community, and it is where the Shibes, as they call themselves, organized the online voting effort that propelled Wise to victory. One Shibe even created an hyperbolically epic promotional video to encourage others to vote for Wise.

After NASCAR announced Wise had won the fan vote, 11 of the top 12 posts on r/dogecoin celebrated the community’s effort. 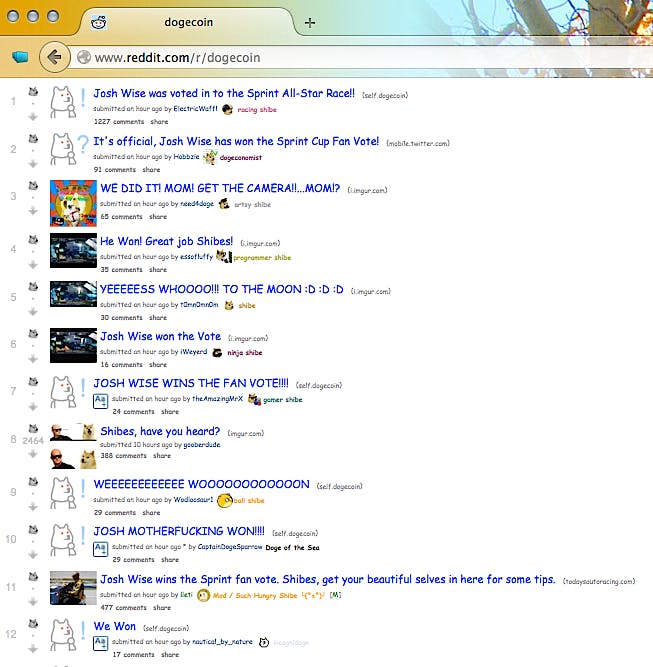 Wise will compete with 21 other drivers in Saturday’s All-Star Race. Of them, 19 qualified for their performance in previous Sprint Cup races and two gained entry for their finishes in Friday’s Sprint Showdown (Wise finished in 18th out of 23).

It’s not a stretch to say that Wise got into the race, which includes a $1 million (2.2 billion dogecoin) prize, because he drives a car with a picture of an Internet meme on it.

“I don’t necessarily care what people say about it,” Wise told USA Today. “People vote and whoever has the most wins. That’s all I have to say about that.”

NASCAR declined to reveal how many votes Wise received, or his margin of victory. Wise finished in 20th out of 43 in his other race under the Dogecoin banner at Talladega Superspeedway earlier this month.