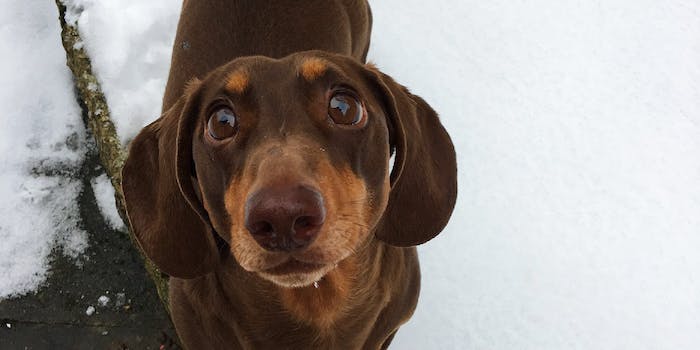 The coronavirus has been hard for almost everyone, but there are some surprise winners in this whole ordeal: the nation’s dogs.

With everyone hunkering down at home, our furred friends are having an absolute blast. For many of them, this is the most time they’ve spent with their humans in ages, maybe ever. While our cats remain overall unimpressed, our dogs are walking on air. Unfortunately, it turns out that this level of joy isn’t always good for their health. One dog, a Dachshund named Rolo, actually sprained his tail from wagging it so hard.

See, Rolo’s humans have been around him, non-stop, for days now. He’s overjoyed. And he expressed this overwhelming euphoria by wagging his little tail hard enough to cause serious injury. His human, who goes by Emma Smith on Twitter, shared the wholesome story online.

“So my dog has been so happy that everyone is home for quarantine, that his tail has stopped working, so we went to the vet and the vet said ‘he had sprained his tail from excessively wagging it,’” she revealed.

Smith noted that Rolo is on pain relief and should be all healed up within the week. “He is super happy and there is now movement from side to side but he is struggling to lift it up in the air,” she wrote.

Smith was also kind enough to include several videos of Rolo. In one, he can be seen joyfully accepting some very good tummy pats. In another, Smith exemplified his typical wagging abilities. He can’t currently wag with the same level of enthusiasm, but he should be back to his usual self soon.

At least someone is enjoying all this self-isolation.