Everyone loves this dog that looks like William H. Macy

The resemblance is uncanny. There's just no doubt about it.

Part of the beauty of owning pets is that we can see ourselves in them. The fierce loyalty of a dog. The grace of a cat. Whatever it is ferrets do. But how much more beautiful would our pets be if instead of ourselves, we saw Emmy award-winning actor William H. Macy?

Reddit user gryff42 submitted this dog picture that, as you can see, does bear a striking resemblance to the star. 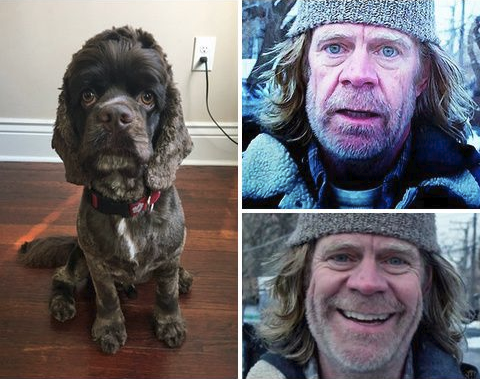 You can almost imagine the little guy digging a hole in the backyard while saying, “I shovel well… I shovel very well.”

The post made it to the front page of Reddit, already no small feat. Then on Tuesday Reddit Co-Founder Alexis Ohanian appeared on Jimmy Kimmel Live. During the interview Kimmel pulled up the front page of Reddit and was quick to agree, the dog really did look like Macy. You can check out that interaction around the 2:12 mark in the video below.

Hopefully Macy isn’t too offended by the comparison. First of all, that’s a pretty cool-looking dog. Secondly, it’s possible the actor was a dog once himself. Maybe we all were.

Also Macy isn’t alone in the canine comparison club. There’s a whole list of celebrities who have doggie doppelgangers. Including these two dogs, who seem to share a similar attitude, if nothing else: Keep on doggin’ in the free world.