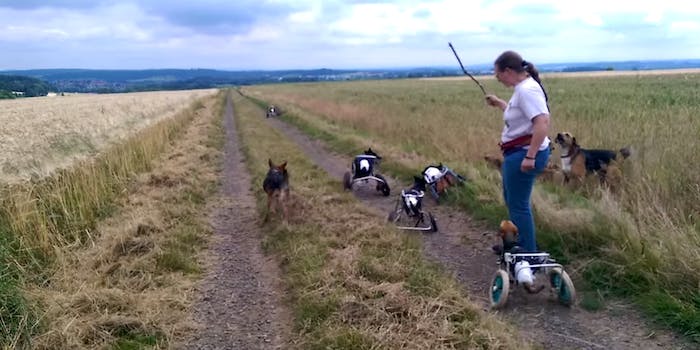 Nothing can stop these disabled dogs from playing fetch

These dogs aren’t going to let something like losing the use of their legs stop them from embarking on one of the better activities of their lives.

It’s not uncommon for dogs with disabilities to be given wheelcarts to help them get around. As the following video will attest, not only does it make them mobile again, they’re also able to play fetch.

Lucky for Gritta Goetz, her pups love to run at the mere sight of a stick.

Goetz explained in the YouTube comments that the dogs in wheelchairs are more than capable of keeping up with the leader of the pack and other dogs who have the use of four legs.

“Don’t worry, They are fast enough to Get it,” she wrote. “And the smallest paralysed Dog is the One who Can ‘protect’ the Stick against everybody. If she gets it, even the leader has No Chance anymore.”