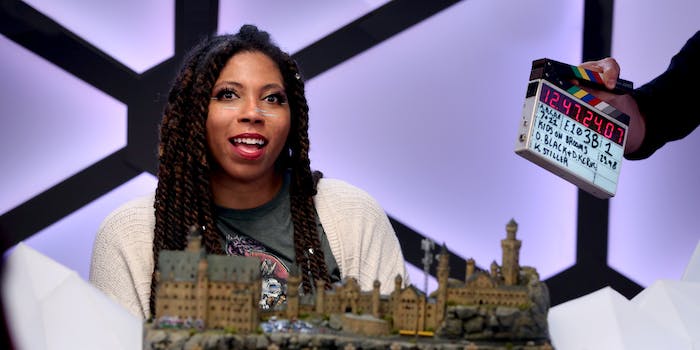 'We're going to swing big and try to tell the most story we can.'

The realm of tabletop roleplaying games (TTRPGs) is ripe for revolution. After a year of demands for ‘racial reckonings,’ small steps to redress racist language and imagery, and countless carefully worded diversity statements, TTRPG titans seem to finally be noticing that something is, indeed, wrong. While they move in sluggish uncertainty to (theoretically) practice inclusivity, one online tabletop show, Dimension 20, is unabashedly placing marginalized folks of different identities front and center—and granting them full creative power.

Dimension 20 is an online TTRPG anthology show produced by CollegeHumor, and its upcoming season, Misfits and Magic, promises something new. It’s led by a Black woman Game Master (GM), the acclaimed Aabria Iyengar, and its cast primarily features players of color—Lou Wilson, Erika Ishii, and Danielle Radford—along with Brennan Lee Mulligan, who now joins the table as a player after GMing every other Dimension 20 adventure thus far. In the new season, these four adventurers play ordinary American teens in a seemingly mundane world—until they’re suddenly recruited by a big-shot wizarding school based in England.

If “British wizarding school” rings a bell, then you’re on the right track: While Iyengar has created a unique universe for her players, this team of creatives is actively deconstructing and taking ownership of fantasy’s most beloved—and now-controversial—wizarding world.

Healing from the hurt: A reclamation of Harry Potter

For many adults who grew up loving Harry Potter, that famous name now causes some discomfort. Modern-day appraisals of the series’ racism and antisemitism, coupled with the author’s haphazard retconning and—most notably—her outspoken transphobia, have led some former fans to wash their hands of the universe altogether.

The two key minds behind Misfits and Magic, Game Master Iyengar and Dimension 20 creative director Orion D. Black, both have complex, love-hate relationships with the series. In interviews with the Daily Dot, Iyengar and Orion vocalized earnest understanding and support for anyone who chooses not to engage with this season because of its link to Harry Potter. However, they also drove home the importance of being able to reclaim a story that has profoundly shaped so many.

Orion, pulling from personal experiences as an agender Black person, specifically pointed to the power of having Black, Asian, and nonbinary players be the ones to reimagine this world, especially as the actual text of Harry Potter was harmful long before its author publicly fell from grace.

“We should have the freedom as the people who are affected by these things, like, since the beginning, since we were kids reading the books—we were the characters who got Cho Chang and the one Black guy who I always forget his name because he was around for, like, two seconds,” Orion said. “And the thing is, we let it go the majority of the time because of what just about everyone who loves Harry Potter and also hates Harry Potter has in their heart, which is like: It gave me something special, and I’m not going to give away that thing that made it special.”

For Iyengar, Misfits and Magic doesn’t just allow people of color to be the “chosen ones” they were never allowed to be in Harry Potter; she wants to reimagine the entire “fantasy boarding school” subgenre, breathe life into a magical realm filled with people of color and trans folks, and allow space for the players’ autonomy and healing by granting them power in the world she’s constructed.

“We’re going to swing big and try to tell the most story we can and work really hard to, like, drag something profound and emotionally satisfying out of this sort of wreckage of our emotional feelings for Harry Potter,” she said. “And we’ll succeed or we won’t. I think we did it.”

Fundamentally, the creators wanted the intention behind Misfits and Magic to be crystal clear.

“This series has more dark-skinned people on it than light-skinned people, specifically to challenge colorism,” Orion said in a public statement. “It has more women than men to challenge sexism. We challenge the world of HP’s transphobia and racism … Put marginalized people in positions of power.”

Beyond Misfits and Magic: Fighting power structures in the world of TTRPGs

“Let’s talk about like the intersection of power—like, all of fantasy. All of these games are power fantasies about leveling up and becoming strong enough to influence the world.”

Such are the musings of Misfits and Magic‘s Game Master. Iyengar is less interested in rehashing the same high fantasy tropes of white-centric source material (“The Chronicles of Narnia? Feels like this is vaguely racist”) and more keen on using her unique perspective to thematically explore power structures.

“You’re playing this game where in six months, you’re suddenly able to change the forces of the world and bend nature to your will, so what does that mean for your responsibility to other people?” Iyengar asked. “I think the thing I love most is analyzing power, tempting people into facing down what that really means. And then, obviously, like I am a raging anticapitalist, like I love me some ‘eat the rich’ … A lot of Misfits and Magic is going to be looking at and deconstructing a formative fantasy narrative that doesn’t hold up.”

Subverting power structures also means examining who gets to be seen telling stories. Not only is white supremacy embedded in fantasy and D&D canon, most prominent TTRPG shows and streams feature casts that are entirely (or almost entirely) representative of one kind of player: Cishet, white, thin, able-bodied, often male. The Dimension 20 team is not only putting in the work to change that, but to actively make the environment safe for all for parties involved.

Cast member Danielle Radford (who plays teenage Twitch streamer Sam Black) called her experience filming Misfits and Magic the “best two days of [her] tabletop career,” directly crediting Iyengar and Orion for cultivating a beautiful space where she was able to be fully creatively present—and offer humanity in the face of fantasy’s dehumanizing tropes.

“Being at a table where, you know, it’s me and Erika and Lou and Aabria, the majority of us are people of color—and that for me is so important,” Radford said in an interview with the Daily Dot. “And for me specifically, when I go into playing games and I go into playing tabletop, my characters will always be Black—they will ALWAYS be Black—and they will always be fat, fucking period, because there isn’t enough of that representation. Like if you see fat, it’s like a goblin or it’s like a dwarf or it’s like, you know, not human … I want other dark skinned fat girls to feel like they are not just allowed at the table, but to feel like they can contribute something, to feel like their contribution is welcome and needed because it is.”

Radford made it clear that this kind of representation is part of a larger need to put more kinds of marginalized people in a room; she advised creatives to think past bringing in a single person and calling it a day.

“There are a million different kinds of marginalized voices and you don’t just need one,” Radford said. “And it’s also unfair for that one to be the only one and to have to carry all of the weight. So if you’re building something from the ground up, keep in mind that there are a lot of different kinds of people and all of those voices make something beautiful.”

The Dimension 20 team, for their part, is aware that the work is ongoing. Orion, who stressed the importance of having been handed the creative reins without having to jump through hoops, promised online that “D20 will have more disabled people, more body shapes, all sorts of changes continued to be made down the line.” Orion also made it clear to the Daily Dot that Misfits and Magic is only “the starting line,” and that Dimension 20’s inclusivity will continue to deepen and grow.

Ultimately, when engaging with the idea of power, there are few things more powerful than a room full of people creating something wondrous together. That’s what tabletop gaming is all about. Iyengar, as Game Master, hopes audiences find nothing but goodness and joy from Misfits and Magic.

“I hope they take that theme of reclamation, of justifying and being at peace with your childhood,” Iyengar said. “Like, to me that is what adulthood is. Putting away the things from childhood that no longer fit or suit or serve you, and holding on to the things that are precious—that have made you who you are in this moment and honoring both and knowing that both things, this process of deciding and divesting and retaining, is important … And then just, I hope they all laugh.”

Weekly episodes of the four-part series Misfits and Magic will available to watch on Dropout, starting on June 30.