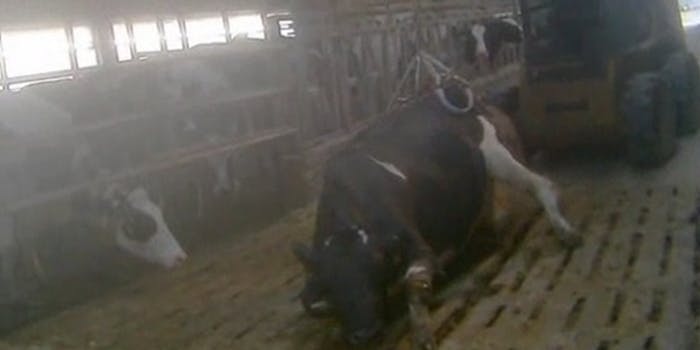 It's not delivery, it's disaster!

Nestle-owned DiGiorno Pizza has a PR mess on its hands after animal abuse came to light at a dairy farm that supplies the company.

The company said today that it will no longer accept cheese from Wiese Brothers Farm of Greenleaf, Wisc., after undercover video shown on NBC News revealed the farm abused its animals by stabbing, kicking, and dragging them.

The leaked video shows employees of the dairy supplier cruelly mistreating cows—it’s not for the faint of heart. Farm workers scream at sick milk-producing cows. Some animals are pulled by ropes around the neck or limbs. Many have infected open wounds.

Activist group Mercy for Animals has changed its entire website to a parody of the DiGiorno logo with the words “Disgusting Digorno.” The site is centered now on the video the group took inside the 2,500 cow farm. , the country’s largest frozen-pizza distributor, Gawker reported.

Nestle has agreed to stop using any cheese from Weise Brothers Farm and DiGiorno has officially dropped Weise as a supplier.

Animal abuse on large farms is common, but it doesn’t often come to light so dramatically. That’s partially because of “ag-gag” laws that forbid filming at farms and slaughterhouses in many U.S. states. In May 2013, a Utah woman who filmed a meatpacking facility from across the street became the first person arrested under an ag-gag law. She was ultimately not charged.

The Mercy for Animals site sums the horror in the video up best with a play on the company’s catchy slogan: “It’s not decent, it’s DiGiorno.”