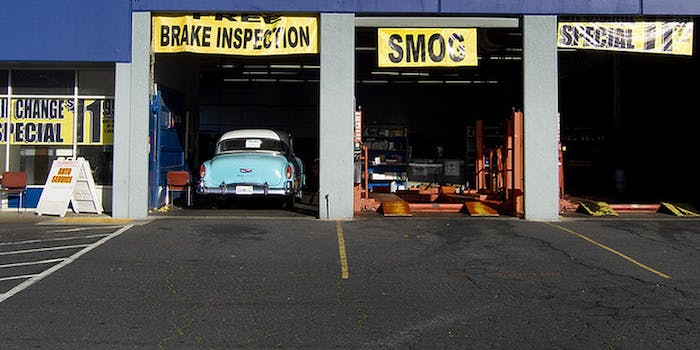 If you're prepared to speak out against the LGBT community, be prepared for your Yelp page to suffer the consequences.

If we’ve learned anything lately, it’s that if you’re in the service industry and you shout from the rooftops that you’re not interested in money that emerges from the pockets of gay people, the LGBT community is going to come down hard on you.

That’s what happened to Memories Pizza in Walkerton, Ind., after the Religious Freedom Restoration Act in that state was passed, and now, that’s what’s happened to the Dieseltec auto repair shop in Grandville, Mich.

The owners of the pizzeria didn’t say that gay people weren’t welcome in their store—they just said they would refuse to cater a gay wedding—but Dieseltec owner Brian Klawiter was a bit more blunt with his thoughts. This was what he wrote on Facebook on Tuesday:

And this was what happened to Dieseltec’s Yelp page in the aftermath. Users turned it as gay as can be.

First, here’s the page header. Notice the unicorn in front of the rainbow who seems to be falling in love with President Obama. That’s pretty humorous, right? (Though I assume Klawiter doesn’t think so.) 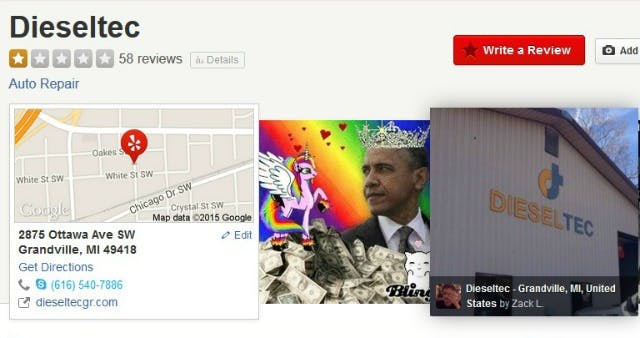 Then, you get to the comments section, and hilarity explodes all over the page.

it was such a drive out of my way, however i heard about the good hand jobs the owner perform on clients, still i had way better hand jobs closer to home… sorry guys over rated….. will get my service elsewhere

Dieseltec worked on my Ford PowerStroke.  It was getting way too hot and spraying white fluids everywhere.  They showed me how to apply a C0K ring to the rod & 2 bearings to prolong the length and intensity I could run my PowerStroke.  Also, they applied liberal amounts of lube to my shaft, which again helped it run long & strong.

They get a 1 star rating for being distracting, they kept yelling “OH GOD” with their Cummings.  I was highly offended that they’d take the Lord’s name in vain during such delicate engine work.  Also, a reach around would have been nice, a little extra pump to brighten my day.  Avoid at all costs.

I gave this place one star, because THATS what Jesus would do. Bigot

And then there was these photos posted by Jessica R. 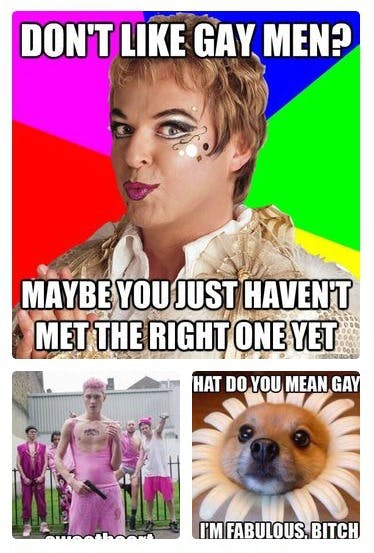 Perhaps the only downside to the aggressive homophobia bashing is that other anti-gay supporters might start donating money to the owner. After all, Memories Pizza received more than $840,000 in GoFundMe contributions.

To be fair, Klawiter wrote in a subsequent Facebook post, “There also seems to be a TON of confusion about one of my comments, the bolt and nut thing was a reference to physiology, bolt penis and nut vagina. I DID NOT threaten to purposely put a vehicle together wrong to harm someone.” He also said he wasn’t interested in people donating to his cause.

But Klawiter isn’t backing down. And the party line seemingly remains, “If you’ve got a gun, we’ll get’r done. If you’re gay, stay away. “

Either way, perhaps Klawiter should take the advice of Yelper Mike W., who wrote, “The owner of this business needs to tone down the anti-gay rhetoric.”