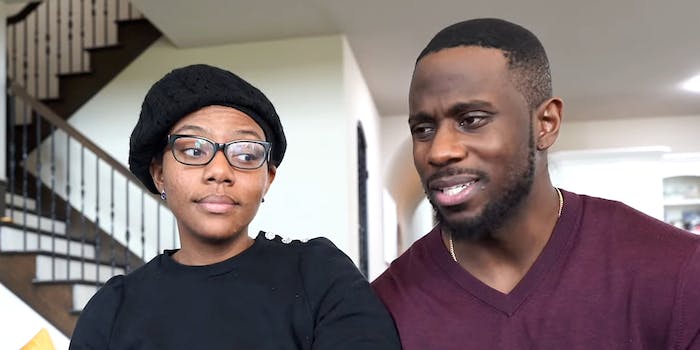 In hilarious news, self-proclaimed social media relationship “guru” Derrick Jaxn was busted for cheating on his wife of four years.

Up to this point, the Alabama native made an entire cottage industry out of providing relationship advice he apparently rarely followed, and the streets have come back to claim the YouTuber.

Jaxn, who boasts 746,000 YouTube subscribers, was outed as a cheater by a woman named Candice De Medeiros in a video from vlogger Tasha K.

Tasha K. played the audio of the interview with De Medeiros for her viewers. The 45-minute video details Jaxn’s affair with the woman. Tasha also relays that Jaxn and the woman were together on his birthday and even slept in his bed (the same bed he and his wife sleep in) at least once.

De Medeiros even posted photos on a deleted burner, that also made it to sis2sis.com, of her with Jaxn, including various texts.

Once the kitchen got hot, Jaxn decided to put himself in a position to guide the narrative, using his poor wife, Da’Naia, as a human shield. In the hastily-put-together video, he explained himself as he clutched his wife’s hand like a vice grip.

He’s famously is known for the oft-memed slogan, “Black men don’t cheat.” Welp, apparently this “guru” does, and the internet put him in jail and let him have it.

One couple even made a parody of Jaxn’s video.

Some people were disappointed in how Jaxn’s wife reacted.

“Jaxny’s wife really came on this live with a bonnet on her head,” @pretti_lucky tweeted. “[C]lear sign that she will be packed up and Uhaul ready by Friday.”