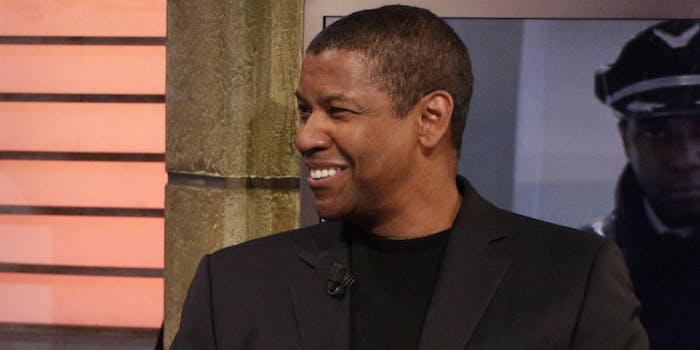 Denzel has no chill.

Think back to the many iconic roles over the course of Denzel Washington‘s career. Which movies have put him on the map? The train(er) in Training Day, Malcolm X in Malcolm X, also the train (employee) in the Taking of Pelham 123—all roles of the utmost seriousness.

Turns out those career choices are as much a representation of Washington as an actor as a person. He has no chill about anything. Not even himself. It’s the exact opposite of the man’s role as a meme, affectionately known as Uncle Denzel.

Perhaps you recognize someone like him at your family BBQs.

Denzel staying in character for his next flick, 'The Uncle Who Still Stays At Grandma’s House’, coming this Christmas pic.twitter.com/jKiT7Cz289

"Boy, run me over to Willie Mae's for summa dat hot fried chic… WAIT A MINUTE, SHE CLOSED DOWN??!" pic.twitter.com/HGQsrExL4W

The role Washington actually showed up for was that of boxing fan. Sporting a tracksuit and baseball cap, the Magnificent Seven actor was among countless celebrities to attend last year’s Mayweather-Pacquiao fight, one of the highest grossing boxing matches in the sport’s history, but also one of its most boring. The only real winners of the night’s bout? A renegade Justin Bieber appearance as part of Floyd “Money” Mayweather’s entourage, and Washington getting turned into a meme.

That’s not the way he sees it though.

When finally asked about Uncle Denzel, ya boy got mad. He got angry. And then he spouted platitudes that seemingly had nothing to do with a shitty choice in outfit and awkward facial hair.

That’s why now more than ever, we need the Uncle Denzel meme. No potential comedy or off-color moment in this man’s career will ever be as good as imagining him as your older male relative who always wears a bluetooth headset that never remembers his cellphone.

This is the role meme the man was meant for. Don’t fight it, unc.