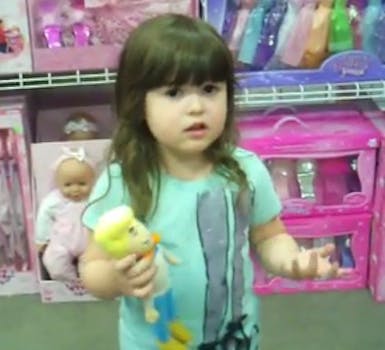 After 2.5 million views, Dennis Barry's celebrates his four-year-old daughter's ability to think outside the box.

To date, her surprisingly insightful tantrum on gender-based toy marketing and packaging has been viewed more than 2.5 million times. Riley’s even appeared on Diane Sawywer’s ABC News segment.

In the wake of her popularity, many Internet citizens and media outlets—as with the eight-year-old activist who spoke up to presidential candidate Michele Bachmann—questioned if Riley was being egged on by her father or coached to say those things.

That’s not the case, Riley’s father, Dennis Barry, told the Daily Dot via private message, though they have talked about similar issues before.

“[A]s you can see, she has no problem expressing herself and I don’t think we could get her to parrot back what someone told her to say even if we wanted to (which of course, we don’t),” wrote Barry.  “Since she was old enough to make choices about what toys she wanted to play with, we have done our best to make sure she understands that she can play with the toys she thinks she will enjoy no matter what the color of the toy or the gender of the kids on the box.

“The sad reality is that unless we are there to tell her that, just about everything else she sees tells her otherwise.”

Riley, who is given free rein to pick her toys, does occasionally pick a “pink doll,” Barry said, “but like most perceptive kids, she knows what is being marketed to her just by looking at the packaging on the toys or at the way the stores are arranged.”

YouTube commenters, notorious for their trolling, have instead taken to defending Riley against the cynics.  “The only ‘brain-washing’﻿ going on is exactly what the child is talking about … boys and girls growing up thinking they should like one thing or the other” wrote MarsRover24 on YouTube.

The video was actually taken in May when Riley was three, Barry said. The two were shopping and when Riley began speaking, Barry pulled out his camera phone to record it to share with his wife.

“We shared it with a few friends at the time,” added Barry, but the video picked up steam when his wife posted it on Princess Free Zone’s Facebook page late last week as part of a discussion about LEGO’s new Friends sets.

While shocked by the attention, Barry said he’s nevertheless happy “to see that many people seem to identify with what she had to say.”