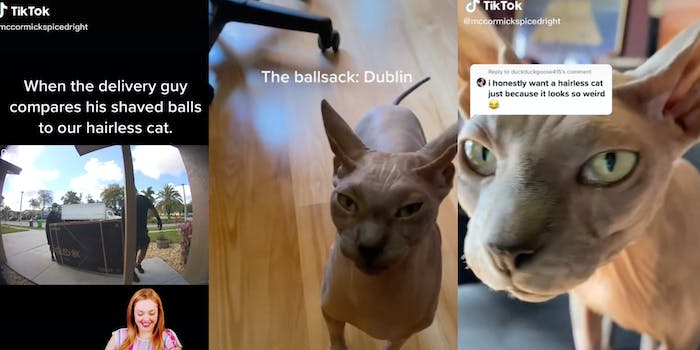 'They all look like my balls when I shave.'

When will people learn that doorbell cameras catch and hear everything?

User Melissa McCormick shared a clip of two men dropping off her new television. But, apparently, they weren’t amused by her grey Sphynx cat, Dublin.

One man points out hairless Dublin and pointedly says, “Yuck.”

After knocking on the door, one voice says: “How do people hold those things, man?”

He continues, “It’s disgusting, bro,” then quips, “They all look like my balls when I shave.”

Luckily, McCormick found the interaction between the two men “comical.” But in the video caption, she jokes: “Now I know how people feel about our Sphynx cat,” with the hashtags #mycatisawesome and #yourballsarenotascute.

Several viewers also jumped to Dublin’s defense; one even lamented that the “poor cat got absolutely body shamed.”

“Poor cat got harassed,” another said.

“Lmao your cat sitting in the window innocently just getting absolutely roasted,” a third said.

Of course, this isn’t the first time doorbell footage has captured people doing cringe-worthy, or even downright horrible, things. Another TikToker previously caught her boyfriend cheating on her through Ring doorbell. And in late 2020, a Domino’s Pizza delivery driver in the U.K. was caught on camera rubbing food on his crotch before handing an order to a customer.