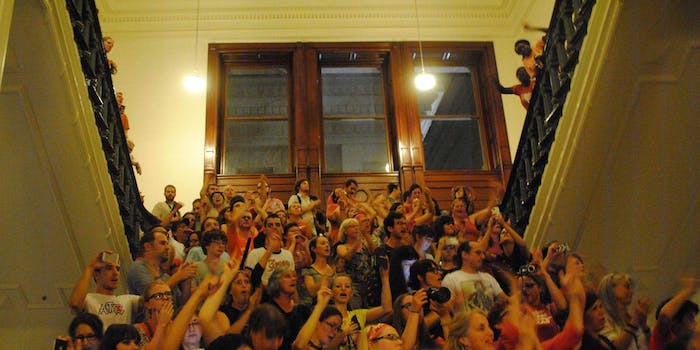 Dot Dot Dot: Is the tweet mightier than the sword?

The view from Texas is pretty inspiring. At least for the moment, the Internet is supercharging democracy.

It was one of those moments that give you faith in democracy and the human race itself.

As the clock ran out on a law that was about to be passed in special session, despite its unpopularity, a crowd of onlookers spontaneously made such a ruckus that the vote could not be held. The mass uprising, civil as it was, extended beyond the capitol rotunda—across the world on social media, as citizens participated in YouTube, Tumblr, and Twitter. In fact, the evening would have gone very differently if it weren’t for the Internet.

I am referring, of course, to the events Tuesday in the Texas State House, where State Sen. Wendy Davis filibustered an abortion law. The law had previously been tabled during the state legislature’s regular session, and it was not supported by the majority of citizens of the state. 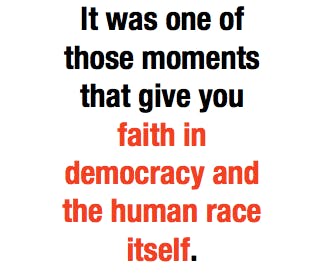 Resuscitated during a special session, it had until midnight to pass.

When Davis arrived at the Capitol Tuesday morning she had already accumulated a huge amount of support online; one Tumblr post about her plan to filibuster the law gathered more than 66,000 reblogs by that evening. As Davis spoke throughout the day, more and more people tuned in to the livestream on YouTube, started following on Twitter, and showed up at the statehouse.

Two hours before the midnight deadline Davis’s filibuster came to an end. She had veered off-topic, according the chair. It was her third strike, and she lost the floor.

Twitter users quickly pointed out that her second violation came from rules on decorum (someone handed her a back brace), not germaneness, and so the filibuster should not have been ended. Ultimately, the senate decided that the ruling had already been made and should stand—but the points of order and other questions had helped run down the clock. 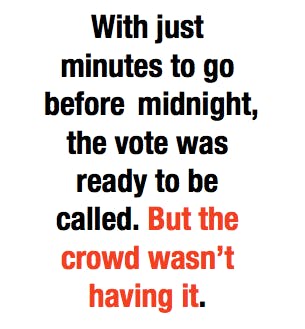 With just minutes to go before midnight, the vote was ready to be called. But the crowd wasn’t having it. In fact, they cheered and shouted and ballyhooed. The vote could not be called until two minutes after midnight.

The mainstream media—primarily TV—reported that the vote had passed in time. Social media and online reporters, however, refused to toe the government line. Posts about the government changing documents and bending the space-time continuum were flying fast and free all over the Internet. Within hours, the government reversed its decision and said the law had in fact not passed.

The pen may be mightier than the sword, but if the events of Tuesday night are any indication, then the tweet is mightiest of all.

Attention is a powerful thing. It used to be that politicians feared the bright lights of TV, but TV’s not really so scary anymore. When we bitch about the “mainstream media,” what we’re often really talking about is cable news. As the most visible element of the media, it has become the stand-in for all media in the popular consciousness. 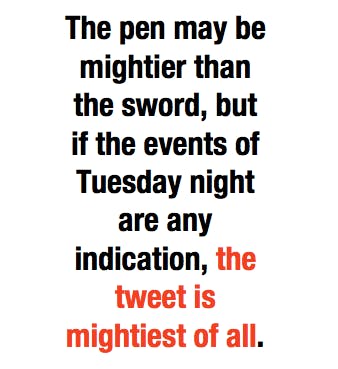 And paradoxically, with all those hours to fill, the 24-hour news providers seem to provide less and less actual, you know, news.

It was not always so. TV was once a light in the darkness, an avenging angel—think of Edward R. Murrow or Walter Cronkite. But those days seem long gone.

That role has now moved online and been democratized. It’s not just the professionals anymore who can be the watchdogs of government.

But can the Internet retain the antiseptic qualities needed for a truly impartial, newsworthy gaze? Or is it destined—as TV declined into the 24-hour cycle of Lindsay Lohan investigation—to devolve into nothing but cat videos?

Whatever the case may be, for the moment, the Internet is supercharging democracy. 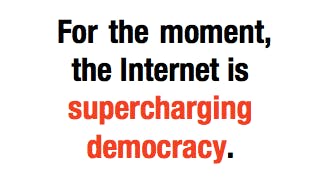 The virtue of democracy is not that it ensures good government. The system itself does nothing to guarantee laws conceived for the benefit of the people, nor guarantee their effective or beneficent enforcement. It is, in a sense, a mistake to say that American government is a government of the people, by the people, and for the people. For most of our history, it hasn’t really been that. Most of the time, most of us ignore the awful grinding of the gears of government, and that inattention is what facilitates its misuse.

No, the real virtue of democracy is that good people—when they choose to do so—can get involved.

The price of that virtue is that bad people—people whose primary concern is for their own selfish advancement and the advancement of their tribe, people who do not scruple to sacrifice others to those narrow interests—can also get involved. A cynic would say that such people avail themselves of the power of participation far more frequently than the good do.

But the Internet gives us a new way to participate, and that can change the nature of American government as it is practiced in the 21st century. Whether you agree with Wendy Davis or not, we saw both true leadership and true mass participation on Tuesday night. Wherever it takes us, I hope we see more of that in the future.