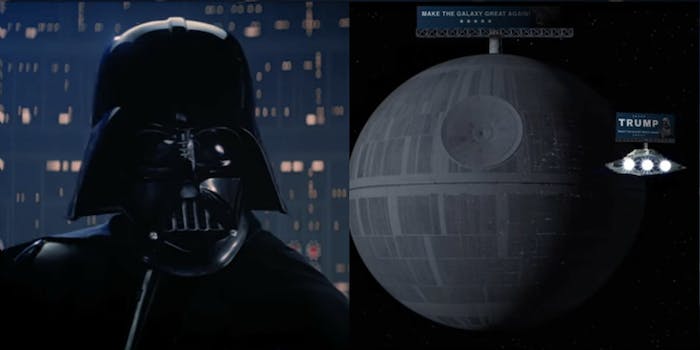 Darth Trump is here to make our galaxy great again

He even has the reality television star's hair.

Many of Donald Trump‘s statements are so ridiculous that they sound like lines from a movie. And while the leading Republican presidential candidate hasn’t starred in his own political farce—other than the campaign he’s running—YouTube user Auralnauts has taken some of the wannabe politician’s most outrageous soundbites and plugged them into the mouth of one of cinema’s most iconic villains: Darth Vader.

From Mexico slams to mockery of Ben Carson, Trump’s soundbites fit hilariously into the Star Wars scenes with the cloaked antagonist. Even Trump’s slogan is weaved into the video, edited to “make the galaxy great again.” And when he’s finally unmasked at 6:30, you can see another one of Trump’s trademarks—it’s not a hair short of ingenious.