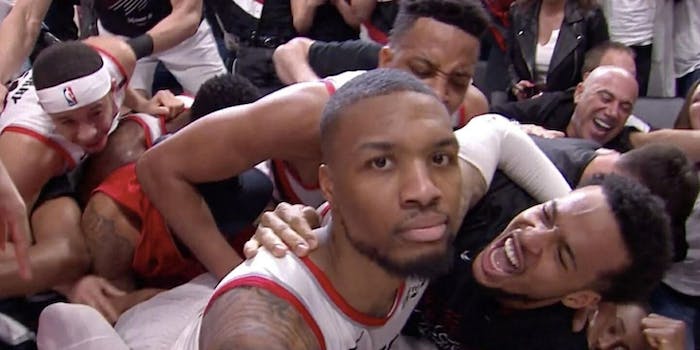 The shot was great. But it's even better when Celine Dion provides the soundtrack.

Damian Lillard’s last-second, long-ass 3-pointer that dispatched the Oklahoma City Thunder for good in the NBA playoffs on Tuesday night has been labeled “psychotic,” “cold-blooded,” and akin to “first-degree murder.”

But if you look at the photo taken seconds after he hit the 37-foot shot amid all the jubilation and celebration around the Portland Trail Blazers point guard, he looks anything but overwhelmed by the moment. Or even excited. No, he looks about as tranquil as a person who just scored 50 points to win his team the game in a high-pressure situation can possibly be.

His face shows contentment. Hell, it shows a hint of boredom even.

Naturally, his calm reaction to the chaos around him was meme-worthy. And people quickly got to work.

Now, here it is set to the soaring climax of Celine Dion’s “My Heart Will Go On.”

His mug also reminded people of somebody else who continues to live (and be loved) in the internet’s heart.

Others thought the expression on his face and the position of his body were created to make him immortal.

And, of course, there were plenty of other thoughts by those who fell in love with that one moment.

This is the hardest basketball photo ever and your argument is INVALID pic.twitter.com/UXlUh8mdUF

Perhaps, though, the most cold-blooded moment of all occurred in the seconds between when he nailed his shot and when he made his face.

After the game, Paul George, the Thunder guard who was defending Lillard at the time of his miracle, said the shot wasn’t a good decision.

“I don’t care what anyone says—that’s a bad shot,” George said. “But he made it. That story will be told that it was bad shot and you have to live with it.”

Statically speaking, Lillard’s attempt apparently only had a 13 percent chance of being successful when the basketball left his hands. But after the face he made when he swished it, there was a 100 percent chance he would be immortalized by memes.