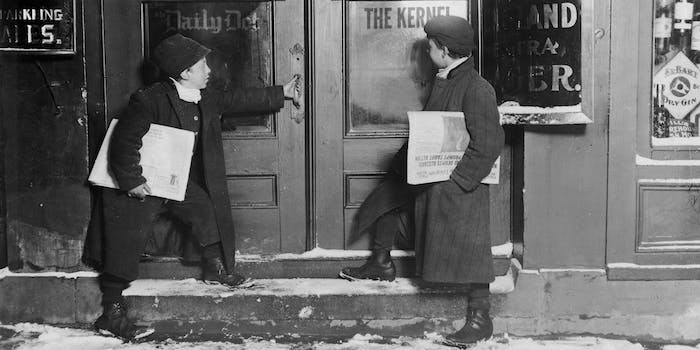 We’ve often thought of The Kernel as the “Daily Dot after dark.” Now it's official.

We’ve often thought of The Kernel as the “Daily Dot after dark.”

The U.K. tabloid has consistently uncovered some of the most fascinating stories on the Web. Like the Dot, it takes an old-school approach to modern journalism. The Kernel dives into the weirder corners of the Internet and reports back what it’s found—with unnerving detail and vivacity.

If you’ve spent any time browsing Digg in the last year, you might already be versed in The Kernel’s work:

These are features that leave a mark, lingering in your imagination long after you’ve closed your browser tab.

That’s why Daily Dot Media is excited to announce that we’re acquiring The Kernel.

Select editorial staff will be joining our team, including Deputy Editor James Cook and Chief Reporter Jeremy Wilson, bringing some of the Internet’s most insightful and exciting coverage under one roof. Founder and Editor-in-Chief Milo Yiannopoulos will continue in an advisory role while pursuing new projects.

Details as to how the two publications will be integrated still need to be ironed out, but The Kernel’s enterprising coverage will continue without interruption. That means you can look forward to another “Unfollow Friday” from Nimrod Kamer.

It’s Daily Dot Media’s first major acquisition and a significant step toward international expansion, further establishing our presence in the U.K. More importantly, it puts us in a better position to meet your needs as a reader, to be the paper of record for the Web—and we couldn’t be more excited for the opportunity.