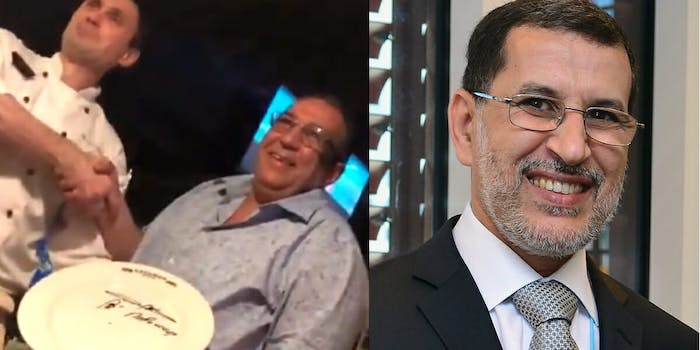 Well, that was easy.

He was born in Inezgane, Morocco in 1956. In 2012 he became the Moroccan minister of foreign affairs and in 2017 King Mohammed VI appointed him prime minister of Morocco.

This is a guy who had trouble getting a table at a restaurant and has probably never even met King Mohammed VI:

What’s a man to do when he calls a restaurant and they say they have no room? Well, apparently one option is to call back and pretend to be the prime minister of Morocco and hope they don’t ask you too many questions. A plan that, at least in this case, seems to have worked out beautifully.

“My dad wanted to make a reservation at a restaurant and they told him that they were completely booked,” @Ihab8knicks, wrote on Twitter, “minutes later he called back claiming to be the prime minister of Morocco….. we got the best table in the place and the chef [asked] him to sign a plate and take a pic w him.”

The tweet, which has been up for less than twenty-four hours, has already amassed almost 20,000 retweets and over 40,000 likes. Meaning there is a good chance the restaurant is going to figure out they’ve been duped into wasting a perfectly good plate.

Although some people on Twitter felt like the dad pulled a lowdown dirty trick, most seemed to find it to be a harmless prank.

HAHAHAHAH BALLER DAD TO THE FULLEST

So did this dad actually commit a crime? Technically, yes. Assuming this took place in New York (according to the son’s Twitter account he lives in Staten Island), what he did is illegal.

According to New York statute 190.25, “A person is guilty of criminal impersonation in the second degree when he: 1. Impersonates another and does an act in such assumed character with intent to obtain a benefit or to injure or defraud another.”

There’s no mention of a free meal, so the restaurant isn’t out any money, but there’s also no doubt that this guy did “obtain a benefit.” Maybe, to be fair, he should at least go back to the resturant and wash the sharpie off that plate.