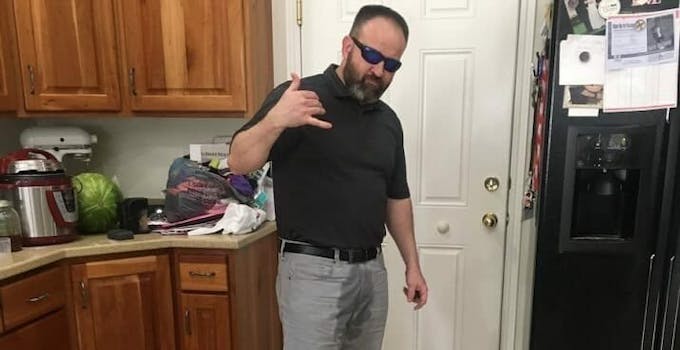 Disaster: a 6-year-old girl peed her pants at school, subjecting herself to discomfort and humiliation. The situation wasn’t looking great. But fear not: this 6-year-old happened to have the coolest dad in the world. In a great bit of parenting right out of the Adam Sandler playbook, dad splashed a little water on his own pants and went to pick his daughter up.

Ben Sowards, the heroic dad in question, found out from his wife that their daughter Valerie had had an accident and wanted to come home, BuzzFeed reported. Not wanting her to feel alone and ashamed, the pee-triach of the family walked into the school office with his trouser-front soaking wet, and asked Valerie if he could use her backpack to cover up his accident.

After Valerie’s older sister Lucinda posted on Twitter about the incident, complete with a photo of their cool pee-pants dad heading to the rescue, he became something of a national hero. The tweet has more than 250,000 favorites now, which is totally unheard of for a non-celebrity.

The stunt is straight out of Billy Madison, the Adam Sandler flick about a grownup who must return to elementary school. Sandler’s character saves his schoolkid buddy from humiliation after an accident by spraying down his own pants with a hose and declaring “Of course I peed my pants! Everybody my age pees their pants, it’s the coolest!”

Who knew that trick would work in real life?

Ben Sowards, obviously. Making sure his daughters don’t suffer life’s little bummers alone is kind of his thing as a dad. Lucinda, the oldest Sowards daughter, told BuzzFeed that when she got a black eye in a skating accident years ago, her dad painted a bruise on himself to cheer her up.

It’s only April and we’ve already found the dad of the year.