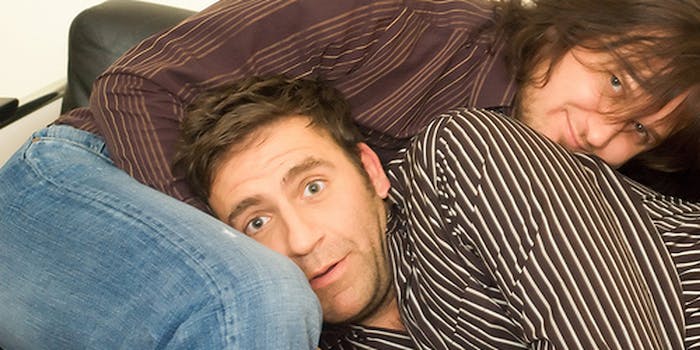 How a cuddling app is helping us rethink intimacy

When you need a cuddle, who you gonna call?

Do you ever feel like sometimes, you just need a cuddle? Well, as of last week, there’s an app for that: “Cuddlr is a location-based social-meeting app for cuddling. Find people near you who are up for a cuddle. Have a cuddle with them. No pressure.” The app has been compared to Grindr and Tinder, except for a key feature: It’s not tapping into hookup culture, but rather into the nearly universal human desire for touch.

The response to Cuddlr, though, speaks volumes about our culture. Both Tracy Clark-Flory at Salon and Lucia Peters at Bustle seem to find it rather distasteful:

Peters is a bit more vehement. She responds, “I’ll admit that my initial reaction to the idea was, ‘NO I DO NOT WANT TO BE HUGGED BY STRANGERS THANK YOU VERY MUCH.’”

Their responses cut to the core of a common notion in Western culture: That physical contact is about sexuality and that there is no middle ground between not touching people at all and sexual touch. Cuddler’s founder, Charlie Williams, argues that “it’s touch, not sex” and wants to see people using the app to hook up with cuddle partners (obviously) but to rethink their approach to casual touching. Williams said, “[T]his middle ground of non-sexual intimacy makes [people] queasy. Why could this be? Why would someone be more willing to pursue sexual intimacy than platonic closeness?

Williams speaks to a growing trend of isolation in Western culture, one that is (arguably) heavily influenced by technology. As many of us work behind desks, staring at computers all day, and turn to technology for recreation and communication, our interpersonal interactions decline—even as many of us boast huge social networks of friends all over the world who come from a range of backgrounds. Tech has brought us together, but it can also be profoundly isolating—send an email instead of meeting someone for dinner, text from the train platform instead of stopping by for tea.

Finding someone to spend time with in a purely platonic way can sometimes seem extremely difficult. Moreover, in a culture of constant busyness and stress, investing energy in platonic relationships, especially those with people of a gender you’re sexually attracted to, can seem inefficient. The thought of dedicating physical intimacy to someone we are not sleeping with might seem alien as we’re simultaneously acculturated to only touch adults with whom we’re sexually intimate and isolated by the technologies that are fundamentally changing our world—thus, there’s something rather poignant about needing an app to find cuddle partners.

The app bridges the digital-social divide to provide a way for people to reach out in their lives and find physicality, without it necessarily needing to be carnal. Williams notes that:

Aside from it being just an app for single people, I see Cuddlr as a tool for communication in couples, too: When the options for what to do with another person are ‘sex’ and ‘nothing,’ that sharp divide makes it easier for members of a couple to assume all of the rules, rather than explicitly discussing them. That divide is an illusion, and bringing platonic cuddling into the public discussion of commitment and monogamy-and-its-variants will help couples negotiate what they are and aren’t comfortable with (and even start to explore why).

In a culture where the very nature of a “normal” relationship is starting to shift in response to Internet culture (where people may be in dedicated relationships for weeks, months, or years without meeting in person) and the rise of a more outspoken and public non-monogamous and polyamorous community, Cuddlr brings up new avenues for exploration. Adults in the West classically associate any kind of intimate physical contact with sexuality: Every back rub has an ulterior motive, every deep hug is an indicator of sexual desire, every warm snuggle is merely a “play” for someone.

Sometimes it seems as though the only situation in which casual, platonic, friendly touch is permitted is in extremis; when someone is grieving, for example, or wants a friendly hug after the end of a turbulent relationship. Outsiders to communities where people are more physically intimate tend to feel very uneasy and edgy—there’s a reason that “touchy-feely” is often used a pejorative to describe communities of people who are physically close and unafraid to be casually physical with each other.

The acceptability of casual contact is also sometimes a matter of geography; the California hug versus the New York handshake, for example.

Cuddlr challenges that. What, socially, would change if people felt more freedom when it comes to interacting physically with each other? It’s telling that users might feel driven to Cuddlr to seek out affirming touch rather than to their own friends and social circles; the lack of comfort with physical intimacy with real-world friends is something that Cuddlr might eventually break down as people became more confident after anonymous or pseudonymous cuddle encounters.

Of course, the app designers have no control over the outcome of a cuddle meetup, and note this in their “rules of the road,” which suggest in a winking way that someone might want to ask for a “cup of coffee” at the end of the cuddle. But, they remind their members, people should “ask politely” for an extension of the session or a change of venue, and they should accept the answer given by the cuddle partner.

So perhaps a few cuddles will lead to something more, but Cuddlr is definitely not designed as a hookup app. Some users might have plans to use it that way, though, which opens up another avenue of tension: What happens when people abuse the app, or when negotiations about what’s expected from the session go south? These issues highlight another social norm that Cuddlr seeks to address: Discomfort with communication and openly discussing ground rules and expectations.

Given that the cuddle party phenomenon is spreading across the nation, perhaps we shouldn’t be surprised that someone has tapped into that zeitgeist with an app intended to facilitate easy cuddling with a swipe of the finger.

Future cuddlers, be warned: While the app doesn’t disclose gender or age (in the spirit of enlightened, non-biased cuddling), it will allow users to rate each other on cuddle quality—so you’d better be on your best behavior.

Image via David Goehring/Flickr (CC BY 2.0)