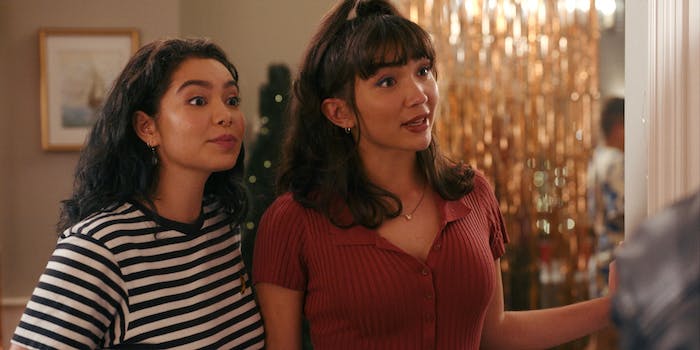 Hulu’s ‘Crush’ is a queer, teen rom-com that flourishes in familiar ground

Crush, the queer teen rom-com from first-time director Sammi Cohen, accomplishes exactly what it sets out to do. It harkens to the kinds of rom-coms that have thrilled us for decades. It’s full of laughs and breezy dialogue from screenwriters Kirsten King and Casey Rackham, and its leads easily charm. While many queer stories center on self-discovery or coming out of the closet to loved ones, Crush instead lets its characters simply experience the highs and lows of the romantic trope spectrum like any other straight rom-com lead out there. In that regard, Crush is a delight.

Release Date: April 29, 2022
Director: Sammi Cohen
Streaming: Hulu
A high schooler gets caught in a love triangle—and a search for a vandal with a propensity for puns—as her application for an art school looms large. While it can’t always sustain its many plotlines, ‘Crush’ is full of delightful performances and its casual queerness is downright refreshing.

The problems that aspiring artist Paige (Rowan Blanchard) faces are, on the whole, familiar ground. Her biggest issue with her mother Angie’s (Megan Mullally, doing the absolute most as the movie’s cool mom) way of being supportive is providing glow-in-the-dark dental dams and attempting to wash her sex toys, both of which cause mild embarrassment for Paige. She’s stumped about how to complete the prompt of depicting the moment when she was happiest for her application to CalArts.

She’s been pining over Gabriela (Isabella Ferreira), one of the most popular girls in school, for years, and can’t string two words together when they do talk. At her high school, a vandal known as King Pun is drawing pun-inspired artwork—an early display shows Smokey the Bear and the message “Only you can fuck the pa-tree-archy!”—around Paige’s high school, and she’s suspect no. 1 largely in part because the school principal (Michelle Buteau) knows she’s an artist.

Facing the possibility of suspension, Paige offers a compromise: She joins the track team so that Coach Murray (Aasif Mandvi) can keep an eye on her (instead of just joining to impress Gabriela) while she tries to uncover King Pun’s true identity; AJ (Auli’i Cravalho), the team’s co-captain and Gabriela’s sister, is tasked with training her in the one event she isn’t completely terrible at. And constantly bubbling in the background is the student body presidential election between her best friends Dillon (Tyler Alvarez) and Stacey (Teala Dunn), who take about every opportunity they possibly can to make out with each other no matter the circumstance.

It doesn’t take a whiteboard to figure out just where things will go, and many of the staples of the genre—a big party scene, smaller moments of vulnerability, the grand gesture—are all there, along with plenty of self-aware commentary about consent, the state of funding in public schools, or sex-positivity. There’s a comfort in the familiarity, but none of it feels like a slog thanks to Blanchard and Cravalho (a particular) at the helm. And among the art is a small visual flare: Whenever Paige gets lost in the eyes of someone she’s crushing on, the background fades away as tye-dye-inspired splashes of color take up the screen.

Crush stretches itself a little too thin trying to juggle it all, and at least one subplot is treated more like an afterthought, only to be picked up again at the very end. Not every joke lands, particularly among the adult cast members. But it doesn’t hinder Crush from being a perfectly enjoyable film: It’s sweet and fun and doesn’t outstay its welcome, and sometimes that’s all you really need.

Crush is now streaming on Hulu.